After Katrina, residents rolled up sleeves 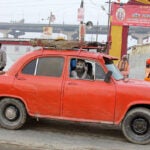 Most people recall the heart-rending images of flood victims clinging to rooftops, pleading for help in the aftermath of Hurricane Katrina, the mega-storm that ripped into the Gulf Coast in 2005. Harder to remember are the grueling recovery efforts in the months and years that followed.

One often-overlooked side to that recovery involves the countless residents who bonded to rebuild their devastated communities. Now a Harvard graduate is making sure their stories are told. Tom Wooten ’08 has just published the book “We Shall Not Be Moved: Rebuilding Home in the Wake of Katrina.”

Wooten, a Ph.D. candidate in Harvard’s sociology department, on Wednesday discussed his work during a talk sponsored by the Harvard College dean’s office, the Harvard Undergraduate Council, and the Harvard Alumni Association (HAA). The Sever Hall lecture was one of Harvard’s diverse Wintersession offerings that help students explore their other interests, and connect with alumni, before the spring academic semester begins.

Recently, the popular winter book talk series featuring Harvard faculty has expanded to include alumni. The new format, say Harvard officials, encourages students to tap into Harvard’s vast network of alumni who can share their career knowledge and experience.

“Once students arrive at Harvard, they become part of a lifelong community,” said Philip Lovejoy, HAA’s deputy executive director. “Wintersession draws alumni back to campus to share their stories and expertise, which ultimately helps students to craft their own paths.”

The new book grew out of Wooten’s interest in another tragedy. During his freshman year, he and his roommate, Utpal Sandesara ’08, began research on the Machhu dam collapse in Gujarat, India, that killed thousands of people in 1979. Their 2011 book, “No One Had a Tongue to Speak,” details the disaster and the Indian government’s top-down approach to the recovery effort, one that “didn’t involve victims of the disaster.”

Wooten said that work made him curious about “what the opposite type of recovery would look like, one that was driven completely by neighborhoods or by residents themselves. … And for better and for worse, that’s what was happening in New Orleans.”

Wooten was one of countless other young volunteers who descended on Louisiana to help its battered coastal communities rebuild when he made his first trip there in 2007, when he was a junior. He traveled back to New Orleans later that year to interview community leaders and study how the city’s grassroots recovery effort was unfolding, for his senior thesis. In 2008, backed by a fellowship from the Harvard Kennedy School (HKS), Wooten returned to the city with the aim of expanding his research into a book.

The resulting work is an intimate narrative that profiles five New Orleans communities and the steps that their residents took to rebuild, in “the vacuum of government leadership” and the absence of accessible federal, state, or city support.

During his talk, Wooten offered the example of Broadmoor, a diverse neighborhood near the city’s heart. Residents responded to an initial city recovery plan created by a special commission, which had suggested replacing their flood-damaged community with parkland, by making their own arrangements for the future.

“What residents decided was that instead of lobbying city hall and saying, ‘You shouldn’t tear us down,’ they were just going to prove that the neighborhood was viable,” he said.

Neighborhood leaders organized meetings on street corners that attracted hundreds of residents. The neighbors created planning committees devoted to goals such as reviving the local school, reopening the library, and rebuilding damaged homes.

Wooten described how the neighborhood leaders, in part with help from HKS, began to apply for their own aid. They successfully secured a $2 million grant from the Carnegie Corporation of New York to help them overhaul their waterlogged library. Instead of relying on the government to reopen their public school, they created their own school board and developed plans for a charter school.

From his Broadmoor porch, Wooten said he “watched the recovery unfold,” and the neighborhood “come back to life.”

But Wooten’s encouraging message also included a note of caution. While he called his hopeful stories of recovery and the capacity within neighborhoods the “the silver lining” of Katrina, the process, he said, was “by no means ideal. This is what happened as a result of neighborhoods being left to essentially fend for themselves.”

Tara Raghuveer, the president of Harvard’s Undergraduate Council, called Wooten “a social studies superstar.” A social studies concentrator with an interest in urban policy and disaster relief, the junior said she hoped to “gain some of his knowledge.”

The author’s words and story struck a chord with the Currier House resident.

“The capacity of people to organize and bring about results … that’s the main take-away, and something that’s hugely compelling to me, because it’s a human story,” she said.