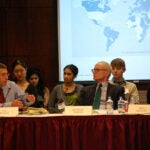 Getting down to business

Sir Alex Ferguson, manager of iconic Manchester United, is arguably the most successful manager in the history of professional soccer. So why not write a Harvard Business School (HBS) case on his leadership style?

“It’s just a dream to be able to understand the drivers of his success,” said HBS Professor Anita Elberse of the source of her inspiration. The case was fascinating, and then came the visit.

One day earlier this fall, Ferguson arrived at HBS to help teach the class.

Ferguson has led Manchester United — one of the world’s biggest sports franchises — for the past 26 years. Last year, Elberse and case study co-author Tom Dye traveled to Manchester, England, to see Ferguson in action. They conducted comprehensive interviews and meetings with the Scottish manager, past and present players, and club staff members.

Their findings offer fresh insights into Ferguson’s storied career and his approach to leadership, particularly his ability to foster a culture of success and dedication throughout the organization, from the team’s elite players to the workers who take care of Manchester United’s famous stadium and field.

“If someone knocks on his door and they have a problem, the first thing he does is turn the chair around and say, ‘Sit down, let’s talk,’ ” Ferguson’s longtime secretary Lyn Laffin says in the case.

In addition to using their detailed research to outline many of Ferguson’s core philosophies, the case’s authors went a step further. Once their work was complete, Elberse and Dye invited Ferguson to Harvard.

“I can try to capture his thinking in a case, but that is only words on paper,” said Elberse, who frequently uses examples from the media, entertainment, and sports industries as the basis for her case studies. “To have him there, and for students to be able to see him in action, see how he addresses a group, and see snippets of his personality, there’s no replacement for that live experience.”

“When you’re approached by an institution like Harvard, you know you are dealing with top quality,” said Ferguson. “I had to consider that I was opening myself up to something I’ve never done before. But at this stage of my life, I felt that if I’m helping young people progress through their own routes to management, then ultimately that was an important and compelling factor for me.”

The Ferguson report differs from many typical HBS cases that analyze a particular scenario faced by an organization, or a key decision made by a company’s director or chief executive, explained Elberse. Instead, it explores Ferguson’s body of work, his leadership skills, and the keys to his sustained success.

“I wanted students to examine his philosophy to the management of the club,” she said, “season by season, and game by game, so that they could distill the major lessons and his formula for success.”

One key lesson is Ferguson’s fine-tuned ability to relate to people. He connects with his wealthy players, but he brings that intense engagement to all of his interactions. That was true during his visit to Harvard. Standing in the middle of a room in Aldrich Hall, he expanded on students’ observations about the case, answered a storm of questions, and even had a little fun with a Bayern Munich supporter in attendance. (Manchester United famously beat the German soccer club in 1999, coming back from a goal down to win 2-1 in extra time during the UEFA Champions League final.)

In a departure from the standard HBS class that typically allots guests 20 minutes, Elberse turned over half of two 80-minute discussions to Ferguson to maximize his time. Many students arrived for the crowded classes wearing Manchester United jerseys. They also came prepared.

“The whole atmosphere was professional,” said Ferguson. “It was clear that they had done their homework. That was the important thing. They had properly read the case study and supplemented that with their own opinions and research. … That gave me a certain assurance that I had made the right decision to go ahead with the case.”

“The process was excellent, enjoyable, and comfortable,” he added. “I never felt intimidated in any way, and I never felt reluctant to be anything other than completely open.”

The wide-ranging discussions touched on such topics as Ferguson’s expansion of the club’s youth system, his willingness to invest in top talent from other clubs, and the nature of his management style.

HBS student and soccer enthusiast Folafolu Folowosele was thrilled to interact with and learn from a legend. Hearing how Ferguson “motivates his players, creates a culture around his team, and gets key influencers within his team to be the ones to drive that winning culture through … these are the lessons we can actually take in our business careers going forward,” Folowosele said.

But the students weren’t the only ones learning lessons. Ferguson said it was enlightening to hear his career discussed and explored in such depth and detail.

“The part of the discussion from which I learned the most about myself was when they were discussing the balance between ‘fear’ and ‘love’ in my approach to managing people. If you look at my history, there’s all this hype about hair dryers and anger and so on. But the students acknowledged another side to it, which is more apt in terms of how I have fostered relations with people and developed the team over the years. The reality is not always how the press portray it. I felt the students were quite accurate in terms of how they analyzed this aspect, questioning and recognizing this important dynamic of management.

“The key element for me was Anita, and how she controlled the room. I am always talking about ‘control.’ She controlled that room. She was the boss. I thought that was very impressive, plus the fact that she has a certain humility about her; she’s quite down-to-earth.”

Ferguson also connected with other students and soccer fans while at Harvard. During a visit in September to prepare for the HBS case discussions, he met with Harvard men’s head soccer coach Carl Junot.

“He was entertaining and engaging,” recalled Junot, who said Ferguson put him immediately at ease and offered to meet the team. “It was so unanticipated. They were expecting me to come in and give them the practice plan as usual, and in walks Alex Ferguson. They were blown away.”

In October, Ferguson set aside time for members of the HBS soccer club. Similar to Elberse’s classes earlier in the day, the more informal afternoon gathering was filled with students sporting Manchester United shirts. Club president John Hillman wore a jersey with the name Giggs printed on the back in honor of the team’s famous Welsh star.

Like Junot, Hillman was struck by Ferguson’s easygoing style. “He was amazingly laid-back and down-to-earth.  … I could just tell that he was being very thoughtful, and was very interested in what I was saying.”

One of guests sitting in on a case discussion with Ferguson was a soccer star herself. Heather O’Reilly, a key player on the U.S. women’s soccer team that won the gold medal during the London Olympics and a longtime Manchester United fan, called the experience “an honor.”