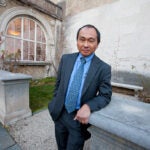 How to build a nation

WASHINGTON, D.C. — Harvard President Drew Faust said Monday that maintaining a strong partnership between the federal government and higher education institutions is “vital to support the research that leads to scientific discovery and contributes to economic growth.”

Speaking to business, policy, and diplomatic leaders in Washington, Faust spoke as political leaders continued negotiations over how to address the federal deficit and avoid the so-called fiscal cliff at year’s end.

“We are the beneficiaries of a partnership between the federal government and higher education that began just after World War II that led to investments in basic research and the expansion of access through the GI Bill,” said Faust. “The question now, as we debate how to address the deficit, is how do we maintain these commitments to access and opportunity, to make college affordable, and to provide paths forward for millions of students who will strengthen America’s economic foundation and will be the innovators who drive discovery in the future?”

Faust was appearing at a Center for American Progress (CAP) event sponsored by Harvard and Google, and titled “Investing in the Future.” During a question-and-answer session with CAP President Neera Tanden, Faust highlighted the importance of basic research.

Faust said, “It’s so important for universities to stay on two tracks: continuing to support applied, translational research — and we’ve encountered that ourselves with significant growth in engineering at Harvard — but at the same time we have to sustain basic research.”

Pointing to challenges in securing funding for such basic research, Faust said it was important that “we not limit science support to what we can discover tomorrow, but that we allow people to ask big questions that will set the foundation for discoveries in generations to come.”

Faust also emphasized the importance of the humanities, saying that America’s global competitors were increasingly interested in bringing liberal arts expertise to their institutions of higher education.

“We have to be very careful about how we think about the liberal arts, which is under incredible pressure in the United States,” said Faust. “Yes, we want to recognize the importance of applied skills and vocational skills. But we also need people who are creative, who can imagine a world different from the one they live in, and who will be able to think critically about the issues facing the country.”

Appearing at the same event, Gene Sperling, director of the White House National Economic Council and assistant to the president for economic policy, said that the discussion in Washington about how to reduce the federal deficit was directly linked to investments in research and innovation.

“The area where the private sector will underperform will be basic research and blue sky research,” said Sperling. “The issue of basic research is a critical issue for us. If you care deeply about innovation and research and investing in science and STEM [Science, Technology, Engineering, and Mathematics Education Coalition], then you can’t be indifferent about whether we reduce our budget deficit by deeper and deeper cuts in discretionary funding.”

“At some point, you’re trading between early childhood funding, biomedical research, and investment in higher education, and these are not trade-offs the public wants to make,” said Sperling. “Those who care about innovation need to care about how we address the budget.”

Speaking earlier at the Economic Club of Washington, D.C., Faust and Georgetown University President John DeGioia announced that Georgetown will join the edX interactive education platform. Georgetown joins the University of California, Berkeley, the University of Texas, and Wellesley College, along with founding partners Harvard and the Massachusetts Institute of Technology.

“We are excited to join Harvard and MIT on the edX platform,” said DeGioia. “In particular, the opportunity to learn more about learning, the opportunity for many of our faculty to engage in a MOOC [massive open online course], provides a new way of learning about how we present information, how we share information, and how we learn.”

“One of the most powerful things that is developing from this platform is the learning analytics that will enable us to understand how young people are learning,” said DeGioia.