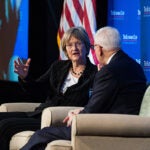 The document dump was formidable: 300 boxes holding more than 20,000 pages of colonial-era notes, letters, and reports released by the British government’s Foreign and Commonwealth Office.

Elkins said yes. But 10 years of researching and writing her book taught her a thing or two about handling volumes of old documents. She knew that she would need help herself.

Elkins organized a group of current and former Harvard students to help her search for keywords and common threads, evidence of both torture and efforts to cover it up.

The five-person team, headed by doctoral student Erin Mosely, toiled through last fall, sifting and categorizing documents even as Elkins began writing the witness statement drawing from their work. Elkins refined the statement in the spring and filed it in late May. This fall, the three Kenyans who suffered sexual assault, torture, and castration at British hands felt the benefit of the team’s work when a British judge threw out government arguments that the events happened too long ago to allow for a fair trial. There was plenty of documentary evidence, the judge ruled, to allow the case to go forward.

“They’ve done an absolutely first-class job,” said Daniel Leader, a barrister with the London law firm Leigh Day & Co., attorneys for the Kenyans suing the government. “We’re heavily reliant on their expertise. I don’t think it’s an overstatement to say this case wouldn’t have been brought without her [Elkins’] efforts.”

For Elkins and the students, the work was a labor of love, but labor nonetheless.  Will Grogan ’13, a government concentrator, pitched in throughout the process, logging five to eight hours a week and then some long December days, fueled with caffeine, to bring the work to a conclusion. Grogan said the project was illuminating and sometimes moving. It was also hard to shake the awareness that his work was part of a case that could alter how the United Kingdom views its colonial legacy.

“This was something everyone came to from a point of passion; that made it easy,” Grogan said. “This was by far one of the most meaningful academic experiences I’ve had, period.”

Grogan’s teammates, along with Mosely, were Megan Shutzer ’10, Elizabeth Pike ’15, and grad student Kristen Roupenian. The five did a first cut of the documents using key search terms. Then they printed out the rest, rolled up their sleeves, and got to work. Each took a batch of documents, spent several days going through it, and then reported back to the group. Mosely entered relevant findings into spreadsheets to keep track of it all.

The task before them was an enormous one, Elkins said. The team had only months to determine the relevancy of each document, tracking not just the obvious smoking guns, but also those pieces perhaps not important until joined with others.

“It was an incredible amount of work,” Elkins said. “When you’re swimming in documents, the only way you’re going to get through is with a collaborative effort. … It was teaching and learning at its very best.”

In the end, Elkins said, the documents bolstered her original research showing British culpability for the violence in detainment camps set up around the country.  The work also showed that some 3 ½ tons of documents were destroyed at the time of Britain’s colonial retreat from Kenya.

The real-time nature of the project, and the stories of the victims, heightened the experience for Pike.

“I saw that history can be a very powerful tool in a modern context,” Pike said, describing some cases in her reading that involved castration and beatings. “Those cases were horrifying. … It all became real to me.”

The Mau Mau rebellion began in 1952, and was largely carried out by one of Kenya’s dominant ethnic groups, the Kikuyu. Thousands of Africans were killed, and 32 white settlers. Kenya’s British colonial roots date to the late 1800s. It was named a protectorate in 1895 and an official colony in 1920. The country became independent in 1963.

The Mau Mau case began in British courts in 2009, spurred by the work of Elkins and other historians, including David Anderson, whose “Histories of the Hanged,” also dealt with rebellion. Three Kenyans — two of the original five have died — are seeking redress for abuses they suffered at the hands of the British colonial administration. The case has not gone to trial as the court has dealt with two government arguments seeking dismissal. In the first, the government argued that the Kenyan government, not the British government, was liable for colonial actions. That claim was dismissed in 2011.

The second argument is that so much time has passed that there is no prospect for a fair trial. A judge ruled in October, partly on the strength of Elkins’ summary of the additional evidence contained in the documents, that there was plenty of documentary and other evidence for the case to advance. The government has appealed.

The ruling is an important one, Leader said. If the appeal is denied, the government will have to go to trial having already admitted to torture.

Leader said he’s hoping for a settlement. The plaintiffs are seeking an apology and some kind of pension system — likely just a fraction of what a loss in court would cost the government.