Egypt’s revolution: A work in progress 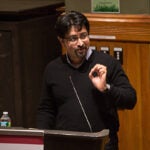 Egypt’s revolution, a key development in last year’s Arab Spring uprisings, has since sputtered and fumed to almost no one’s satisfaction: not the international community’s, not the Egyptian people’s, not even the revolutionaries’ themselves.

Despite the dissatisfaction, the fact that it is moving ahead — albeit by fits and starts — is reason for encouragement, an authority on Egypt said Monday, adding that even the continuing street protests are signs that the people still hope for change and believe that their voices count. In addition, they are not being violently repressed.

“This isn’t over … it’s just starting,” said Jon Alterman, the Zbigniew Brzezinski Chair in Global Security and Geostrategy at the Center for Strategic and International Studies in Washington, D.C.

Alterman spoke at Harvard’s Sever Hall as part of the Center for Middle Eastern Studies’ lecture series on the region’s transformation. The talk, hosted by Roger Owen, the A.J. Meyer Professor of Middle East History, was titled “The Egyptian Revolutions and Defining the New Normals.”

Alterman said that people are either inspired or concerned when they look at Egypt today. The inspiration comes from the nation’s ability to throw off the 30-year rule of former President Hosni Mubarak during the uprisings that started in January 2011. The concern comes from what has happened since.

The nation has had difficulty getting back on track, Alterman said, with expectations of an improved economy being not only unmet, but shattered by increased unemployment, rising prices, and a declining tourist industry.

The Muslim Brotherhood, whose candidates won control in parliament and whose presidential nominee, Mohamed Morsi, won the presidency in June, has risen to political ascendancy amid continuing political and constitutional turmoil.

After Mubarak resigned, the military led a transitional government. The first free parliamentary elections were held late last year and early this year, but in June Egypt’s Supreme Court ruled the election unconstitutional because different areas had used different standards to decide the winner. In July, the new president reinstated parliament until another body could be elected. The latest protests have rolled out as the nation considers a new constitution, the subject of a national referendum on Dec. 15.

Many of the troubles the nation has experienced are due more to the inexperience of its new leaders than to any ill intent, Alterman said. The average Egyptian, he said, is concerned about everyday issues, such as the lack of jobs and security. Riots caused by soccer hooligans, he said, are one indication that the new government hasn’t gotten adequate control of the police.

International diplomacy is another area where the government’s inexperience has been on display, Alterman said, though the government did play a role in ending last month’s fighting between Israel and Hamas in the Gaza Strip.

Relations with the United States play out mainly on a practical level, with the two nations focusing on the ample common ground where they can work together around issues such as border security, terrorism, and maintaining peace with Israel, Alterman said.

Egypt has traditionally had a role as a regional leader, but issues at home have made it difficult lately for Egyptians to look beyond their own borders, Alterman said.

Though Alterman framed the continuing protests in a positive light, he added that there is a danger that people are beginning to believe that the only way to get change is to march. During one week in October, he said, there were protests by college students for lower tuition (which they won), by doctors, and by taxi drivers. Members of the judiciary are now on strike, he said, which is worrisome because they’re supposed to oversee the upcoming constitutional referendum.

Alterman called the new constitution “flawed, but not fatally,” saying its problems spring more from loose drafting than malignant intent, though it does reflect the new normal in Egypt that religion has a place in politics.

As for opposition candidates, including the liberals who were active in the revolution, whether they can form viable political parties and play a part in the nation’s political scene remains to be seen. Their difficulty comes in appealing to people outside the cities, Alterman said, and learning about effective organization from the Muslim Brotherhood. If the opposition is able to do that quickly enough, it could emerge as a credible national force.

Another encouraging sign, Alterman said, is that so far those who have lost elections have done so peacefully, accepting the results in hopes of winning next time.

“The losers so far in Egypt have behaved like democrats. The question is whether the winners will behave like democrats,” Alterman said.