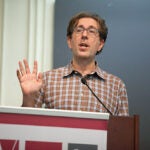 Each year at this time, Harvard’s Memorial Church presents members of the University community and beyond with the gift of song.

For more than a century, the church’s Harvard University Choir has performed two Christmas carol services that include readings by the clergy, and a mix of traditional and contemporary carols and hymns sung by both the choir and congregation.

“It’s a beautiful part of the holiday season, and an important offering that the church gives to the community,” said Edward Jones, the Gund University organist and choirmaster who has led the service for the past decade. “We are now in our 103rd annual performance. As far as we know, it’s the oldest continually running carols service in America.”

Though its overall format has remained largely unchanged since it began, the service regularly blends the old with the new, weaving favorite carols in with newer works, including an annual commissioned song. This year’s services will premier three new carols. These include a work by Carson Cooman, the church’s composer in residence, based on a Shaker text, along with a larger work by the composer and Boston University lecturer Mary Montgomery Koppel, based on a 15th century Latin text about the Mary and the Christ child.

“I think one of the important things about Christmas is to keep it anchored in the traditional while, I believe, very importantly making it new every year with the inclusion of new carols,” said Jones.

In addition to offering members of the community a chance to raise their voices, the free service also offers a chance to give back. Each year the choir solicits donations for a local charity during the performances.

“I think of it as a service that lasts beyond the two nights,” said Jim Lawson, who has been active in the church for the past 25 years. “The choral service is one of those great gifts that continue to give throughout the coming year.”

Another highlight is the singing of the Austrian hymn “Silent Night,” composed by Franz Gruber in 1818. Singing in both German and English, said Jones, commemorates the impromptu truce between British and German troops who put down their guns as World War I raged on Christmas Eve, 1914, and joined in song, including “Silent Night.” The performance is fitting, given the church’s history. The building was dedicated in 1932 in honor of the University’s dead from that war.

“You just get goose bumps” while listening to “Silent Night,” said Judith Sizer, a parishioner for almost 20 years. “It’s just an amazing experience.”

But the members of the audience aren’t the only ones who eagerly look forward to the service in the ornate church, which is festively lit and decorated with rows of colorful poinsettias.

“I love the carols service. It’s my favorite thing that we do all year,” said Jasmine Miller ’13, who has sung with the choir since her freshman year. “It’s just a wonderful thing to have so many members of the community come together — people from the Harvard community, people from the Cambridge community. … It’s just wonderful to be able to share music, and share faith, too, in that space. And of course, the music is fun to sing. Everyone loves Christmas carols.”

This year, two other important voices will be added to the services on Sunday at 5 p.m. and Monday at 8 p.m. The church’s new Fisk organ, Opus 139 in the rear gallery, will make its carols service debut, as will Jonathan L. Walton, the new Pusey Minister and Plummer Professor of Christian Morals.

“This year is a special year,” said Jones.

“I can’t wait to go [to the service] this year,” said Sizer, “because I will be able to be part of the service, but also to see how it’s going to be evolving with our new minister.”