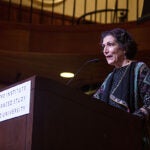 Doug Lemov is obsessed with finding out what makes teachers sparkle.

“Teachers do the most important job in the world, and one of the hardest,” author and educator Lemov told a packed audience Thursday evening in the Harvard Graduate School of Education’s (HGSE) Longfellow Hall. In his hourlong talk, “Good, Better, Best: Teachers, Teaching, and School Reform,” Lemov described some of the concrete techniques that he believes can transform good teachers into great ones.

Necessity was the mother of Lemov’s approach to teacher development. When he started as managing director of the nonprofit group Uncommon Schools, Lemov (who earned an M.B.A. from Harvard Business School in 2004) said he encountered obstacles. “Books about teaching [methods] didn’t help,” Lemov said, nor did the other professional development resources he tried. They were too abstract for his teachers to apply in their classrooms, he said.

An undaunted Lemov, using data from standardized tests as his criteria, set out to study those teachers “who were beating the odds every day” in overwhelmingly poor and minority schools, teaching students who were outperforming their counterparts in higher-income schools. Lemov’s goal was to change the assumption that “ZIP code is destiny,” that student outcomes have to mirror geography or income levels. Lemov began data-mining these overperforming “bright spots” to extract best practices for his teachers.

Lemov videotaped “champion teachers” to isolate what they were doing right. This field research led to his 2010 book “Teach Like a Champion.” “None of these ideas are mine,” Lemov admitted with a self-effacing chuckle. “They’re what I’ve learned from [studying] great teachers.” Most of all, he learned that small changes can bring big results.

Citing musicians and artists, and even Argentine soccer superstar Leo Messi, Lemov contended that practicing the small things counts: “You build up to a masterful performance by practicing the techniques,” breaking them down into discrete parts, rehearsing them, and then integrating them. Lemov showed videos of master teachers applying techniques like “cold call” (calling on students whether or not they raise their hands) and “no opt out” (when a student says he can’t answer a question, the teacher ends the interaction with that student repeating the right answer).

Teachers “need to enhance their strengths,” as well as work on their weaknesses, said Lemov. “Most [school] systems focus on the bottom performers, not the best” teachers, thus neglecting potential gains. Lemov detailed the problems of professional development: It “doesn’t address questions of daily struggle for teachers”; it’s “disconnected from operations”; it’s “one-and-done” (no follow-up); and “teachers [simply] don’t like it.”

Lemov praised the data-driven approach of No Child Left Behind. The data that the program provides, Lemov said, “gives us a greater glimpse of what happens in the classroom and what it means.” Lemov also advocated for a “common vocabulary” to discuss classroom “moves” that teachers make. Lemov cited HGSE Professor Thomas Kane, a lead researcher in the Measures of Effective Teaching project (funded by the Bill & Melinda Gates Foundation), who had told Lemov earlier in the day that naming something opens up possibilities. Kane had explained that once basketball players “started calling one particular move a jump shot, they could then begin talking about it in detail.”

Responses to Lemov’s talk were generally enthusiastic, with Kane praising him for “breaking down the art of teaching into discrete ‘moves’ simple enough to be taught and practiced.” Kane returned again to the basketball analogy, explaining, “If [former UCLA basketball coach] John Wooden had simply told his team, ‘Play like Bill Walton,’ UCLA basketball would have had one superstar, not a dynasty. Instead, basketball is a sport with many named behaviors — ‘the fade-away jump shot,’ ‘the pick and roll’ — which are practiced. Similarly, we need to parse effective teaching behaviors into chunks small enough to be held in one’s working memory and rehearsed. That’s the only way we’ll transform teaching.”

Not everyone agreed that Lemov had “slam-dunked” the maddening complexities of improving teacher performance. Josh Bookin, a HGSE master’s program graduate who now works for Harvard Kennedy School’s SLATE teaching initiative, questioned Lemov’s use of standardized tests: “I am very concerned by Lemov’s method for quantifying excellent teaching, which is essentially to identify those practices commonly performed by teachers whose students do well on standardized tests. There’s a lot of research that shows that our current high-stakes standardized tests do a poor job of measuring complex knowledge and skills — things like solving novel problems, synthesizing disparate information, and working effectively in teams — which are essential for success in the 21st-century knowledge-based economy.”

But Lemov believes that even if K-12 teacher development that breaks classroom instruction down into concrete, actionable techniques can’t turn every good teacher into classroom versions of Michael Jordan, such techniques still can enhance the quality of teaching.