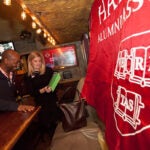 Eight Harvard historians gathered at Emerson Hall Wednesday night with an ambitious goal in mind: to explain — in eight minutes or less ­apiece — that “everything is history and history is everything.”

Without historical inquiry, they suggested in their short presentations, people may be ill equipped to take on the most daunting challenges of the age, including the financial malaise, climate change, the state of American democracy, and the role government should play in citizens’ lives.

“We study history in order to see more clearly into the situation in which we are called upon to act,” said the financial historian Niall Ferguson, quoting R.G. Collingwood at the Harvard History Department-sponsored discussion titled “Everything is History — History is Everything.”

History is too chaotic and unpredictable to tell the future, but it can help to understand possible futures, said the Laurence A. Tisch Professor of History and author of “The Ascent of Money.” “As historians, we can offer rough analogies, which may be more useful than deterministic models.”

To a large extent, history can be defined by the ways that humans interact with the unpredictable — including disasters both human-created and natural.

“We cannot properly understand human society if we treat people separate from the natural world,” said Professor Ian Miller, historian of modern Japan and author of “The Nature of the Beasts.”

History has helped people to understand disasters better, like the recent Hurricane Sandy, Miller said. But history may also have helped to produce disaster. As the tempo of disasters picks up, perhaps powered by factors such as global warming, it seems that “we are in fact manufacturing the conditions of our own suffering.”

Can this way of life continue? It’s an open-ended question, Miller said. But history is in the distinct position to help people find an answer. But the answers that people choose to act upon — the possible futures they choose for themselves — must wind their way through the democratic process. So the issue becomes a political question, Ferguson said.

On the heels of Tuesday’s presidential election, the democratic process was on the mind of James Kloppenberg, Charles Warren Professor of American History.

“There are so many variables when it comes to the study of democracy in America,” Kloppenberg said. Why do we even have elections? Why do we exclude some people from the voting process? What about term limits?

What people take to be natural and inevitable has instead emerged through a process of historical development, Kloppenberg said. “If you want to understand democracy in America, the only way you can do that is by looking at the institutions, looking at the ideas, and looking at the practices of democracy by studying them in history.”

“All elections are historic,” said Emma Rothschild, Jeremy and Jane Knowles Professor of History. “The U.S. election of 2012 was historical in the very particular sense that the disputes — and they were many — held to an unusual extent on U.S. economic history.”

The two large economic ideas on which so much of the election turned involved government and the market, or the state and free enterprise, said Rothschild.

If the difficult questions facing people, such as Social Security, health insurance, and climate change, are to be addressed, this will mean either continuing to increase the size of government and regulation, or increased effectiveness.

Jill Lepore, the David Woods Kemper ’41 Professor of American History and moderator of the event, defined history as “the account of the whole past in time, the story of the entire life of humanity.”

“In other words,” she added, “everything is history and history is everything.”