The lessons of election ’12 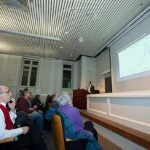 Two political philosophers from opposite sides of the fence met at the Tsai Center Thursday to size up the factors in play during the recent presidential election, and the weight that they could take on in 2016.

Bill Kristol, the editor and publisher of The Weekly Standard and a Fox News Channel commentator, and William Galston, the Ezra Zilkha Chair in the Brookings Institution’s Governance Studies Program, have met to debate such issues biennially for the past two decades.

Galston, a Democrat, called the Barack Obama-Mitt Romney race a missed opportunity for the parties to clarify the big issues, and a “status quo election” in which societal and political changes that began in the mid-1960s with civil rights and immigration legislation are now rippling wide. “The second shoe has dropped, with momentous impact, and the Democrats are now getting the upside” through an increasing share of the Latino vote, Galston said.

Kristol, a Republican, saw reasons why his party should take heart even though Romney lost despite hundreds of millions of dollars in super PAC spending.

“Incumbents usually win. Obama won, but by a narrower margin than in 2008,” he pointed out. In addition, businessman and former Gov. Romney “wasn’t the perfect candidate himself or for this year,” and electoral trends reverse themselves more quickly than experts predict.

That said, he continued, it was appropriate to “panic.”

“If you lose four of six elections, and the four that you lose are convincing, and the two you win are tight, you’ve got a problem,” he said. “It means you have a powerful protest party but not a powerful governing party.”

Like Galston, Kristol said the parties missed chances to better articulate their goals.

“Ideas matter; reality matters too,” he said. If the president is unable to solve America’s pressing domestic and foreign problems in the next four years, he said, that will give conservatives a chance to roll out a compelling fiscal narrative.

The panel, which was sponsored by the Center for American Political Studies and the Program on Constitutional Government, also included Michael McConnell, a professor of law at Stanford University and a senior fellow at the Hoover Institution, who focused most of his remarks on the role the judiciary played — or didn’t play — in the race.

“It’s usually Republicans who talk about judges at election time. That’s what they do for the social right, nominate judges who’ll support that position,” he said. This year, however, Romney wanted a referendum on the economy and kept emotional issues such as abortion at a distance, as best he could.

After their presentations, the panel took questions from the audience, with Harvard’s Robert Putnam, the Peter and Isabel Malkin Professor of Public Policy, frequently joining from the floor.

Campaign contributions were raised again. (“Billionaires had a bad influence on Republican fortunes in this election,” said Kristol. “Money can buy you something; the question is why what the money bought didn’t have more of an effect,” said Galston.) Also discussed were New Jersey Gov. Chris Christie’s endorsement of Obama’s hurricane response (“It rubbed a lot of Republicans the wrong way,” Kristol said); the accuracy of Nate Silver’s election predictions; and the threat of Taxmageddon, a one-year $494 billion tax increase possible on Jan. 1.

“The bottom line is that if Congress can’t come to an agreement by Dec. 31, two things are going to happen: Taxes are going to go up, and spending is going to come down significantly,” imperiling the fragile economy, said Galston. “The question now being debated is how the parties can get to enough of a yes to avoid the cliff.”