Souter, back on the bench 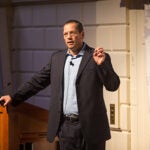 David Souter hung up his judge’s robes more than three years ago, after nearly two decades on the nation’s highest court. But on Thursday night, the retired Supreme Court justice seemed as sharp as ever as he directed his easygoing, often droll, always astute wit at the Harvard Law School (HLS) students arguing before his bench.

Souter — joined by Reena Raggi of the U.S. Court of Appeals for the 2nd Circuit and Mark Wolf of the U.S. District Court for Massachusetts — presided over the final round of the 102nd Ames Moot Court Competition. The evening’s oral arguments, held in a packed Ames Courtroom in Austin Hall, marked the culmination of more than a year of research, brief writing, endless practice sessions, and two qualifying rounds that winnowed 38 teams to two.

Even among the mock courtrooms of other top law schools, Ames stands out for its rigor, its emphasis on brief writing, and its glamorous final showdown, often judged by an active or retired Supreme Court justice (Justice Sonia Sotomayor last year; Chief Justice John Roberts the year before). Adding to the pressure, each team of six faced the possibility of joining the fortuitous ranks of previous winners: a list that includes former Justice (and Roe v. Wade author) Harry Blackmun, HLS Professor Cass Sunstein, and Gov. Deval Patrick of Massachusetts.

“There’s nothing as electric as the Ames,” Raggi told the crowd.

The case in question concerned constitutional questions of state and federal powers. The fictional state of Ames had passed a “Buy American” law requiring state and local agencies to restrict purchase of green technologies to those manufactured and sourced in the United States.

The petitioners, led by oralists Vivek Suri and Cormac Early, argued on behalf of a Chinese-sourced company that the law intruded on the federal government’s supremacy in foreign affairs. The respondents’ oralists, Emma Freeman and Michael Lieberman, countered that the law was perfectly constitutional, and wouldn’t stop companies that used foreign materials from selling to other clients in Ames, or in any other state.

After rapid-fire questioning and 15 minutes of deliberation, the justices returned to offer their final opinion.

“Counsel in all their performances, written and oral, were so extraordinarily good that we had to draw some very, very fine lines,” Souter ’61, LL.B. ’66, Hon. ’10, said, adding — perhaps extraneously, given the blunt nature of the arguments — “We’re not being polite.”

His advice to the students? “If an issue is before the Supreme Court of the United States, there is one thing you can be reasonably sure: that it was not taken up merely to fine-tune little doctrinal statements,” he said. Rather than looking for technicalities to bolster a case, “find a big thing to argue if you can,” he added.

In this instance, he said, the federal government’s absence from the case in question was, by itself, a demonstration of how the Buy American law had already overstepped federal bounds. No such case would be decided by the Supreme Court, he said, without the participation or opinion — even in the form of a friend-of-the-court brief — of the federal government.

In the end, the judges favored the respondents, who had argued the constitutionality of the state’s Buy American Act. Their meticulous briefs “respected the rule that, as they say, God is in the details,” Souter said, and the team’s oral performance barely edged out that of the petitioner’s team. Freeman was named best oralist.

Just as with a real Supreme Court case, however, there was some dissension in the ranks. Raggi favored the petitioner’s briefs and oral performance, but acknowledged her bias for the underdog. “When I was an Ames participant, I was a losing Ames participant,” she said. (She had also watched her own child compete in the Ames Courtroom, she said, a true test: “How long can a parent really hold his or her breath?”)

Though her own loss in the Ames finals had left her “convinced my life was over,” Raggi, J.D. ’76, reassured both teams that “there’s life after Ames, sometimes even on the federal bench.”

Wolf and Souter, who had also competed in the Ames competition as HLS students, were more blasé about their losses.

“I don’t think I made it out of the first round,” said Wolf, J.D. ’71. “I’m sure glad I got my Harvard Law School degree and my judgeship decades ago. I don’t think I’d fare well in competition with any of you.”

Souter — known in his Law School days as a bit of a wild card, who once engaged in a casual swordfight that landed him in health services — took a different lesson from his team’s loss. Unlike Raggi, “I did not think my life’s prospects were coming to an end at all,” he told the audience. “I simply said, ‘I’ve got to find better judges.’ ”