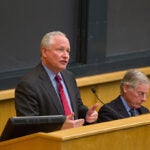 The lessons of election ’12

While the issue of education may have been largely missing from presidential campaign rhetoric, supplanted by language aimed at calming fears about the economy, many polls suggested it was still a top concern for voters.

In a discussion at Harvard’s Graduate School of Education (HGSE) Thursday, a panel of experts examined how the election results will affect education reform at the federal, state, and local levels.

Education wasn’t a main talking point during the campaign, the speakers agreed, in part because of its nuance and political sensitivity. Obama programs such as “Race to the Top,” a $4 billion competitive grant program that rewards states that develop reforms, has some support from states but is “not easy to explain,” said Jal Mehta, an assistant professor of education. Mitt Romney, Mehta said, was forced to balance his track record of overhauls at the state level with the Republican Party’s desire to have a “limited federal role in education.”

Voters are worried about the nation’s education system, said Martin West, an assistant professor of education and deputy director of the Harvard Kennedy School’s Program on Education Policy and Governance, but they often perceive it as “someone else’s problem.”

Part of the evening’s discussion centered on the prospects for the Elementary and Secondary Education Act of 1965, which established high standards for students and high accountability for educators and administrators. The act was amended and reauthorized as the No Child Left Behind Act (NCLB) of 2001 under George W. Bush, but it has failed to receive further reauthorization from a Congress deeply divided over its system of reforms. Many critics argue that the act places too much emphasis on test scores and standardized measures to evaluate student performance.

Yet Congress could potentially unite behind some kind of reauthorization of NCLB based on lawmakers’ distaste for the way the Obama administration has circumvented many of its accountability systems, said West. Both Democrats and Republicans, West argued, are upset with U.S. Secretary of Education Arne Duncan for granting waivers that exempt states from parts of the law. As a condition of those waivers, Duncan has required that states adopt certain policies supported by the administration, like teacher evaluations based on objective indicators.

“In particular, this attachment of additional conditions that Congress has not promulgated itself is what has members of Congress worked up.”

West added that he hoped for an early reauthorization of the act during Obama’s second term. Such a move could provide “stability in the policy environment,” he said.

Moderator Paul Reville, a senior lecturer on education at HGSE and Massachusetts’ secretary of education, asked the panelists to address the status of the Common Core State Standards Initiative in the wake of Obama’s victory. The Common Core program is an effort to establish a shared set of educational standards for English and math that states can voluntarily adopt. More than 40 states participate in the program.

Although Mehta deemed it a “good program in principle,” he worried it could, like NCLB, push for ambitious yet unattainable targets. “I am fearful that in a climate where there is no money, high accountability, and really high standards, what is a good idea will get rolled out, schools and states won’t be able to realize the standards, and that will lead to backlash.”

Looking ahead, panelist Celine Coggins, founder and CEO of Teach Plus, a national education nonprofit that works to retain experienced teachers in urban classrooms, was hopeful. She said she envisions the president continuing to promote a national model that supports teaching as a performance-driven profession, one that “puts the interests of the students first” and moves away from a system traditionally linked to seniority. “I think that has been a really good thing. I think it has seen its share of challenges over the last four years, but for me it’s the right track.”