Law and disorder on the reservation 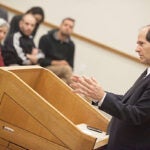 A nudge toward better outcomes

At Harvard Law School (HLS) Nov. 8 for the first day of a two-day conference titled “Tribal Courts and the Federal System,” Troy Eid, chairman of the Indian Law and Order Commission (ILOC) started his talk with a quiz.

The share of all juveniles in federal detention that are Native American, answered by a student from Tufts: two-thirds.

True: Most Native American juveniles are transferred to federal custody, even when tribes want to charge them locally, due to the Major Crimes Act of 1885 and the Juvenile Justice Act of 1938.

“[This] has been treated as if it cannot change, like the tablets of Moses,” said Eid, whose commission, established by the Tribal Law and Order Act of 2010, has spent the past year interviewing members of more than half of the federally recognized tribes in the country in preparation for a report to be delivered to the president and Congress.

How many Native American juveniles are tried and sentenced as adults? Thirty-two percent. Off reservation, the number is 2 percent.

“We’re still using a late colonial model,” Eid explained. “In some instances, they are termination models.”

In trips to four reservations in Alaska, to villages not connected by roads and frozen for much of the year, the commission found scant Internet service, $16 quarts of milk, and gas at $12 a gallon. The official unemployment rate: 80 percent. So the bulk of Native sustenance comes from hunting and fishing — yet tribes are subjected to laws and treaties that restrict their fishing, severely in some cases.

“The entire system is designed as if these indigenous people do not exist,” Eid told the conference.

“This isn’t about race,” he continued. “This is about basic political integrity and autonomy.”

The conference was the first of its kind at Harvard Law School, bringing together tribal judges, scholars, and policymakers. The audience of about 50 included tribal members of the Harvard community, professors, and students from Harvard and neighboring universities. It was streamed to 200 viewers via the Federal Bar.

Federal-tribal criminal justice is “a complex maze” of multiple systems, “created piecemeal over time,” “imposed,” and “alien to locals,” she said.

Goldberg said that “major restructuring” needs to happen. Justice, she said, should be culturally appropriate and include intergovernmental cooperation, respect, and trust.

A talk by Kristen Carpenter, professor at the University of Colorado School of Law, and a 1998 graduate of HLS, covered the importance of decriminalizing Indian religions.

Carpenter focused on U.S. v. Winslow Friday, which addressed a violation of the Bald and Golden Eagle Protection Act. Friday had killed a bald eagle for worship purposes, without obtaining the proper permit. The case, eventually sent to a tribal court, illustrated complexities at the crossroads of Native American religious freedom and the protection of wildlife.

The keynote speaker was Kevin Washburn, of the Chickasaw Nation, recently confirmed assistant secretary for Indian affairs and Oneida Indian Nation Visiting Professor at Harvard in 2007-08.

Washburn stressed that economic development can decrease crime on a reservation, and said that he is confident tribal leaders are better able to make decisions on local allocation of resources than he can in D.C.

The ILOC’s report, to include recommendations for improvements to the system, is expected to be presented to the president and Congress in April.