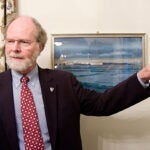 Harvard Medical School (HMS) faculty members are working with the city of Cambridge to provide mental health services in partnership with police, schools, and youth services programs, as part of a wide-ranging effort to keep kids out of court.

Since its founding in 2007, the Cambridge Safety Net Collaborative has successfully diverted hundreds of Cambridge youths into structured activities — such as athletic leagues and after-school programs — and linked them to counseling and mental health services, when needed.

James Barrett, an instructor in psychology in HMS’s Department of Psychiatry and with the Harvard-affiliated Cambridge Health Alliance, heads the mental health assessment and treatment part of the program. Barrett meets with representatives of the other key organizations involved — Cambridge police, schools, and the Department of Human Service Programs — every other week. Together, they review cases involved with the Safety Net Collaborative and refer them to an appropriate program.

Safety Net got its start in 2007, when Robert Haas arrived as Cambridge’s police commissioner. In surveying the department, Haas, who had served as the state’s secretary of public safety, realized there were limited options for officers dealing with juvenile crime. The officers could arrest the kids, disperse them, or send them home to their parents.

Haas launched a youth and family services unit, assigning a handful of officers to deal exclusively with young people. The program developed ties with the schools and youth centers and approached the health alliance to provide mental health assessment and services.

A diversion program is important, Haas said, because once young people become involved with the criminal justice system, more trouble tends to follow.

“There’s lots of research that once a kid is in the court system, it’s difficult to get them on another path,” Haas said. “We tried to move from a reactive model to a preventive one.”

The program has evolved, Haas said, and youth officers today are looked at as resources rather than merely agents of enforcement.  Officers have been trained to recognize red flags in behavior that indicate a role for Safety Net, Barrett said. Each officer has Barrett’s cellphone and pager numbers.

“It really is a role shift for these police officers,” said Barrett.

In the years since the program was founded, it has expanded to serve younger kids. Now it routinely receives referrals for fifth, sixth, and seventh graders, rather than the older teens targeted when the program started. Some referrals come from youth resource officers noticing behavior on the streets, or from teachers concerned about classroom behavior. Some come from parents.

That means the youths tend to have been involved in relatively minor issues, such as running away from home or exhibiting defiant behavior, Haas said. The result, according to Barrett and William Pollack, an associate clinical professor of psychology at HMS and senior consultant to Safety Net, is that the programs have been able to divert kids before they are involved in outright crimes.

“When teenagers get into trouble, it tends to be more serious. Often there’s a legal charge,” Barrett said. “It has gotten to be more preventative than we had even hoped.”

Too often, youths are ignored outside the schools until they get into trouble, Pollack said. In a city like Cambridge, with a wealth of resources — it has five youth centers —Safety Net helps to coordinate resources and reduce the chance that kids will fall through the cracks.

“You often see disconnects between youth workers, police, and mental health. [In this case] they’re all connected, with Harvard and Harvard Medical School” nearby, Pollack said. “Unfortunately, our interventions for youth, especially around crime and criminal behavior, [often] occur out of fear when a major event occurs. People say, first we have to have safety, then we have to do something.”

Officials involved with Safety Net shared their experiences with authorities on juvenile crime and diversion programs from around the country in October, during a workshop convened at the Harvard Faculty Club.

Safety Net currently serves about 70 young people, though the number can vary. While there are more boys than girls in the program, girls make up a sizeable minority.

Barrett and Pollack are beginning an in-depth assessment of the program, though there is anecdotal evidence of its effectiveness. Just two Cambridge juveniles were arrested last summer, and city officials have recently noticed fewer kids with a history with the courts applying for city jobs programs.

“It’s gone well beyond my expectations when I took over,” Haas said. “It’s really been a remarkable partnership.”