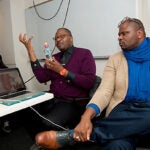 In a tight contest for the presidency, one thing was for certain: a Harvard graduate would occupy the White House come January. But newly re-elected President Barack Obama, J.D. ’91, was hardly the only Harvardian to win a race Tuesday night.

Harvard Law School Professor Elizabeth Warren, a Democrat, was elected to the Senate, making her the first woman to represent Massachusetts in the legislative body.

Harvard alumni can boast two new senators in Washington. Republican Ted Cruz, J.D. ’95, of Texas, and Democrat Tim Kaine, J.D. ’83, of Virginia, join 10 Harvard alumni in the Senate who were not up for re-election this year. New Mexico Democrat Jeff Bingaman ’65 and Wisconsin Democrat Herb Kohl, M.B.A. ’58, are retiring.

The House now counts 31 Harvard alumni among its 435 members, among them 19 incumbents and 12 new congressmen. Massachusetts Democrat Barney Frank ’61, J.D. ’77, is retiring. (As of Wednesday, three congressional races involving alumni had not yet been called but leaned in the Harvard candidates’ favor, and are represented in these figures.)

In addition, a number of other candidates with Harvard ties — including graduates of executive education programs at Harvard Kennedy School (HKS) and Harvard Business School, and former fellows and directors of the Institute of Politics (IOP) — were successful Tuesday. Of those candidates, 14 incumbents and one challenger won seats in the House. (One race remained too close to call.) Bernie Sanders, I-Vt., a former professor and fellow at HKS and the IOP, won re-election to the Senate.