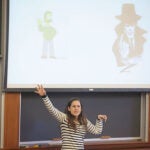 As the last days before the presidential election tick down, a man who has seen the sausage-making process from the inside said that there’s much at stake, and “every day is important here.”

In a wide-ranging talk at Harvard on Thursday, Michael Dukakis, the 1988 Democratic candidate for president, discussed attempts to suppress “likely Democratic” voters by making it difficult for them to register, the Electoral College (“It should have been abolished 150 years ago; it’s a profoundly undemocratic body”), and even rail transport, which brought out the fan in the longtime T rider.

But he kept circling back to health care and the economy, subjects likely to weigh heavily with voters on Tuesday. Dukakis said that Democratic President Barack Obama “has done something no other president managed to do, and that is give us something close to universal health care.  Nixon tried it, Clinton tried it, Obama did it.”

However, Dukakis added, “I don’t think my party has done a good job of communicating what the Affordable Care Act is all about.  We have 50 million Americans who have no health insurance. We have another 50 million who have very poor coverage. Ninety percent of these people are working or members of working families. Why hasn’t the [Democrats’] principal message been that working Americans will have affordable health care?”

On the economy, Dukakis, a distinguished professor of political science at Northeastern University, pointed to the lessons taught by President Herbert Hoover’s policies and the Great Depression.

“We’re in a big economic hole, and we’re going to get out of it, but austerity can’t get you out of a recession,” he said. “I don’t know why we have to learn this lesson over and over again. It just doesn’t work.”

During the discussion hosted by the Program on U.S.-Japan Relations, Dukakis also addressed his party’s defensive stand on national security, pointing out that many Democratic politicians are too worried about being considered soft to bring a critical eye to defense spending, which a recent Cato Institute policy analysis concluded could sustain cuts with only slightly adverse effects.

“We have a defense budget that’s so bloated it’s unbelievable,” Dukakis said. “But I don’t see any Democrats in Congress falling over themselves to endorse what the Cato Institute is proposing.”

Dukakis, a former three-term governor of Massachusetts, said of Republican presidential nominee Mitt Romney, another ex-governor of the state, “If Romney wins, I think you’ll get the Republican game plan: more tax cuts for the wealthy, more cuts to the budget without reducing the deficit one dime.”

Should Obama be re-elected, Dukakis suggested, “You’re going to have a battle, but I think the president is firm on the question of additional tax cuts for the wealthy. He’d come back with more clout to a Republican Party that you’d think would be at least somewhat chastened.”

“I don’t know what happened to him. Scalia calls himself an originalist,” a justice who believes the Constitution should be interpreted as its authors intended, “but where in the Constitution does it say that money is speech?”

Though the decision has not emerged as a major campaign issue, even though it has opened the door to increased spending, Dukakis said, “Who we elect as president, who in turn appoints justices to the Supreme Court, is important.”

On foreign policy, Dukakis said he thought that Obama has an “intelligent, thoughtful worldview” and that Romney “is out of his element.”

“The notion that the United States can continue to be the world’s policeman is badly flawed. We’re not doing it very well, and we can’t afford it,” said Dukakis, a self-proclaimed “committed internationalist.” Instead, he said America should play a new role, building up international peacekeeping institutions such as the International Court of Justice and encouraging their use.

“I do think this is a huge opportunity,” Dukakis said, “not just for the world at large, but for the United States.”