Digital society from the bottom up 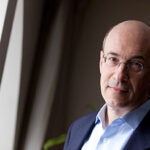 A Q&A on economic outlook

As communications takes an increasingly central role in the postindustrial economy worldwide, the transition to a digital society is threatening those at the bottom — and could marginalize people of color, a University of Southern California scholar said Tuesday as he opened the three-part fall W.E.B. Du Bois Lecture Series, “Exclusions and Inequality in Digital Societies: Theories, Evidence, and Strategy.”

Wilson described a “scissor effect,” in which minority ownership, control, and content in the media has decreased in lockstep with the growth of media importance. In 2009, he said, African-Americans owned 1 percent of broadcast assets; today, that number has shrunk to 0.7 percent.

“We should care about this because we are citizens and these are matters of the life and death of democracy,” he said. “There is no democracy without a free press. The free flow of information is essential to a democracy, and with the death of so many newspapers it is not clear that we have a healthy flow” in which issues important to minority classes are responsibly reported, and correspondingly addressed.

Wilson said the lectures were intended to begin a dialogue, to which end he has started a website. There he has posted four questions — including how the introduction of new social media and other communication technologies has affected the African-American community, and what their impact has been on African-American engagement with other communities — as well as responses from authorities such as NAACP President Benjamin Todd Jealous and Michael Copps of Common Cause. He also encourages responses on Twitter, @Digital_Du_Bois, and he urged feedback from those attending the lectures.

“African-American status in a knowledge society may not be a happy picture in the future. We in this room need to prevent a dystopian future,” he said.

Wilson provided his own five-point response to the question he posed others — what would W.E.B. Du Bois say about the information revolution?

“Whatever the answer is, it has to be based on sound empirical evidence,” he said. “It would require rethinking, and perhaps rewriting, perceived conceptual frameworks. Matters of exclusion, oppression, and discrimination, especially by race, must be front and center. All of this must lead to purposeful and progressive action. Finally, we should be aware at all times that we are operating in a global environment.

“The point I want to make is that we’re in a tough place,” Wilson said. “[But] there are these weird moments in time [when] there is a coincidence of a bunch of scholars working on an issue and a federal, state, or public actor who wants to know about it and in turn there is a political world, instead of political actors, who need that information. We happen to be in one of those moments right now.”

The W.E.B. Du Bois Institute for African and African American Research’s series continues today with “Policy Responses to Digital Inequality: Beyond Economics” and concludes Thursday with “Structure, Agency and Culture in Digital Societies: Struggles at Home and Abroad.” Lectures are free and open to the public and begin at 4 p.m. in the Thompson Room of the Barker Center, 12 Quincy St., Cambridge.