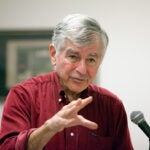 For years, Diane Moore and her students have debated the implications of landmark Supreme Court decisions in her “Religion, Democracy, and Education” course at Harvard Divinity School (HDS). But they rarely get to dig past the scholarship to the actual names attached to those decisions — people like Ellery Schempp, a freethinking 16-year-old who, more than 50 years ago, decided to protest his suburban Pennsylvania high school’s mandatory daily Bible readings.

As it turns out, Schempp, now 72, has been happily residing just a few miles away, in Medford, for the past 20 years. On Wednesday, he made the quick trip to the Center for the Study of World Religions to talk about his experiences as one of the last living symbols of a series of Supreme Court cases that banned state-sponsored displays of faith in public schools.

“There are very few people who have won a Supreme Court case about First Amendment topics who come to Harvard Divinity School, and most of us are dead,” Schempp told his audience with characteristic bluntness.

Schempp’s case, Abington School District v. Schempp (1963), effectively overturned laws in more than 30 states that endorsed or required Bible readings in public schools. Most of those laws were relics of late-19th-century anti-Catholic sentiment (Bible reading by lay people, such as teachers, was at the time a Protestant practice) and had gone largely unchallenged. But at the dawn of the 1960s, as the McCarthy era was ending and the Civil Rights Movement was beginning, cases like Schempp’s found their historical moment, said Moore, a senior lecturer in religious studies and education at HDS.

“There was the sense of recognition that diversity in our country was a really important thing,” Moore said. And nowhere was the debate over religious expression more contentious than in America’s public schools. “Schools are representative of the values of a given society,” she said. “They’re symbolically, but also pragmatically, creators of and responders to our cultural values.”

One day in 1956, Schempp, who was raised a Unitarian Universalist, brought a Quran into the classroom and read it quietly during his class’s mandatory reading of 10 biblical verses.

“I wanted to show that the Bible is not the only source of truth and not the only holy book,” he said. “But the Quran was really by accident. One of my friend’s fathers had a copy of it in his library.”

After being sent to the principal’s office and then to a guidance counselor (who wondered if he had problems with paternal authority), Schempp wrote a letter to the American Civil Liberties Union, which eventually took up his case. Driving him, he said, was a teenage sense of injustice: It didn’t seem fair that his Jewish and Catholic friends would be deemed problematic students or less patriotic citizens for failing to adhere to the Protestant faith that his school endorsed.

“The court’s decisions reaffirmed that our founders were confident that you do not have to belong to a church or participate in public prayers in order to be a good citizen and a good person,” he said.

For an outspoken skeptic of theistic beliefs, Schempp is surprisingly amenable to organized religion. A retired physicist, he is an active member in a Unitarian Universalist congregation in nearby Bedford.

“I think there’s a place for celebration and ceremonies,” he said after his talk. “And I wouldn’t call it worship — we don’t worship — but it’s nice to get together with friends to share ideas. I even like singing hymns.”

Other First Amendment advocates from Schempp’s era weren’t as lucky. He told the audience of Madalyn Murray O’Hair, an outspoken atheist and controversial public figure whose case, Murray v. Curtlett, was consolidated with Schempp’s when it went before the Supreme Court.

While Schempp’s family only endured minor harassment from their community — Schempp’s principal went out of his way to write “letters of dis-recommendation” to every college to which he applied, he recalled — Murray O’Hair’s family “suffered horribly.”

“She was an atheist, but she was also a woman atheist,” Schempp said. “Women have so often been regarded as the repositories of faith that for her to be an atheist was a double whammy.”

In 1964, Time magazine dubbed Murray O’Hair “the most hated woman in America.” Her children were beaten up; her house was firebombed. In response, the fire department responders took a “particularly circuitous route” that took them 40 minutes to get to the scene, according to Schempp.

“The whole community of Baltimore rose up, pretty much in one voice, against her,” Schempp said. In 1995, Murray O’Hair, one of her sons, and her granddaughter were murdered. (In a curious quirk of American religious history, Murray O’Hair’s other son, William — on whose behalf she had brought her original lawsuit arguing against enforced Bible reading in Baltimore public schools — went on to become an evangelical Baptist preacher.)

For Moore’s class, the talk provided a lesson in the burden of public scrutiny that is sometimes borne by individuals who are swept up in high-profile cases. That is important to remember, because the “global trend to regulate belief” continues, said Nate Walker, a student in Moore’s class and a Unitarian minister, who had invited Schempp to speak. Earlier this year, the Kuwaiti parliament passed a law allowing the death penalty for the crime of insulting God, the prophet Muhammad, his wives, or the Quran. In Indonesia, a man faces 11 years in prison for posting “God doesn’t exist” on Facebook.

“Throughout the world, governments are struggling to define when and where to grant religious freedom, to whom, and based on what rationale,” Walker said.

Indeed, even in the United States, believers and nonbelievers continue to battle over where to draw the line between acceptable expressions of faith and unacceptable religious coercion in public schools, Schempp said.

“One of the things that’s so disappointing to me is that 50 years after the Supreme Court decision, we’re still fighting some of the same battles,” Schempp said. “You’d have thought they would’ve abated by now.”