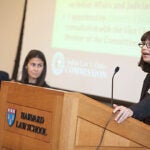 Law and disorder on the reservation

Alma Guillermoprieto wandered a drought-stricken town in El Salvador, cattle carcasses poking from the dirt. “It was so poor, so poor, so poor,” she says with a wince, telling the story now.

Guillermoprieto’s visit was prompted by the discovery on Aug. 25, 2010, of the bodies of 72 migrant workers, men and women hailing mostly from Honduras, Guatemala, and El Salvador who had been heading north to the United States through Mexico, along a stretch of railroad known as la bestia — the beast.

News of the massacre sent chills around the world, reinforcing notions of chaos and terror in Mexico.

In El Salvador, Guillermoprieto found the family of one of the 14 women among the victims, discovering that many of her kin, and many from her small and impoverished village, had perished along la bestia. Guillermoprieto, a Mexican-born journalist, author, and former Radcliffe Institute fellow, recalled asking the woman’s 13-year-old relative if he, too, would make the dangerous trek northward. He said yes.

“You can talk at them until you’re blue in the face,” said Guillermoprieto. “It’s a terrible thing for a young man or young woman to be sitting in one of these villages with no opportunity. What else are they going to do?”

Travelers in Hiding: Telling a Story of Central Americans in Mexico

Guillermoprieto returned to Radcliffe on Tuesday to deliver the Schlesinger Library’s 2012-13 Maurine and Robert Rothschild Lecture, with a focus on the still-unsolved mass murder, believed to be connected to Mexico’s ongoing drug war, which has claimed more than 50,000 lives.

Men and women daily risk their lives for la bestia, leaping onto a passing train car for a ride that, they hope, may usher them to a better life. Some die trying, or lose limbs; others make the jump but are assaulted, sometimes sexually, along the route, only to then face corruption among authorities at the border. The threat of cartel violence is an added danger to the already treacherous journey.

Although she continues to write about problems plaguing Latin America in venues such as The New Yorker and The New York Review of Books, Guillermoprieto said that after learning of the 72 murders, her first impulse was to keep her distance. “I’d written enough similar horror stories,” she told the crowd.

Guillermoprieto envisioned an altar like those built for Día de los Muertos, the Mexican day of remembrance for the dead. “A true altar de muertos,” she explained, “is a site where we bring the dead back to life by talking about them, letting them know that we haven’t forgotten, letting them know that they’re welcome back into our home.”

But, she noted, “being that the dead in Mexico are so numerous that they’ve become statistics … there was no way I could talk or write about each of the 72 migrants myself, so the answer of an online virtual altar imposed itself as the only practical solution.”

72migrantes.com was born. Guillermoprieto sent out an international call, and writers near and far chimed in, each choosing a migrant to write about. Pictures arrived  — some of the murdered migrants, others of la bestia, men and women pooled on the tops of pummeling train cars. Artists donated songs, as singing is a traditional component of Día de los Muertos, as is preparing the dead’s favorite foods. That would obviously be a problem on an online platform, so Guillermoprieto began taking online donations, which are directly funneled to a priest-run migrant shelter in the southern state of Chiapas. The shelter is a necessary pit stop for migrants in need of a good meal before embarking on their voyage.

Additional help comes from las patronas, kind strangers along la bestia who are often just as poor as the fleeing migrants, said Guillermoprieto. Las patronas work without funding and out of sheer kindness, making tortillas and tacos and stuffing them into plastic bags. Daily, they walk to the tracks and wait to throw the bags of tacos to the blurred migrants aboard the fast-moving train.

The online altar has multiplied in many ways, Guillermoprieto said. It’s inspired theater productions, books, and, last year, on the first anniversary of the massacre, Radio UNAM, the station of Universidad Nacional Autónoma de México, presented a dramatic reading by famous actors of the site’s testimonials.

“Perhaps this is the main reason why the altar in its various manifestations has lasted so long,” said Guillermoprieto, “because they’re proof that Mexico still is a country where, against all the odds, acts of generosity and decency and solidarity and inspiration remain not only possible but constant, so the altar has become a place of encouragement, and not just of mourning.”