Truth, values, in a reviving America 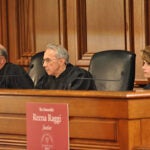 Souter, back on the bench

With a bitter national election finally fading in the rearview mirror, Harvard scholars in various fields, during a series of interviews, looked ahead and struck an optimistic chord, suggesting that the country can meet the many serious challenges facing it.

Scholars in religion, ethics, science, government, and politics offered their thoughts on the race just run and the road ahead. An authority on government divined signs of an emerging America flexing its political muscle. A physicist hailed the accuracy of polling as an illustration of science’s centrality. An ethicist expressed hope that the money-chasing political system will be reformed. A political scholar suggested that both parties could yet cooperate and pass immigration, education, and energy legislation. And a religious leader said it’s time to shift national attention to Main Street and reclaim the old-fashioned values that made people care for each other.

Theda Skocpol, the Victor S. Thomas Professor of Government and Sociology, said that although the 2008 election was historic in making a black man president, the 2012 contest was perhaps more significant because it confirmed that the fresh political activism of four years ago is still afoot in America, one where the young, minorities, and women increasingly flex their political muscle.

“This election was, if anything, more important than the 2008 election, because what it did was confirm that a new American society and politics is fitfully taking hold,” Skocpol said. “This confirmed what became possible in 2008. It means not the end of racial and generational and partisan conflict — they may even become more intense — but it ensures this new America is going to move forward into the next few decades.”

Though voters solidified the status quo of the past two years — a Democratic president, Democratic Senate, and Republican House — Skocpol and Lawrence Lessig, the Roy L. Furman Professor of Law and director of the Edmund J. Safra Center for Ethics, attributed the results more to the power of incumbency and gerrymandering to make congressional districts safe from opponents rather than to a conscious choice by voters.

Bargains and compromises
“Most American voters and certainly the vast 40 percent in the middle do not want gridlock,” Skocpol said. ‘They don’t necessarily want the same party in charge of everything, but they definitely would like to work out bargains and compromises, and I think they delivered that message in this election.”

Lessig attributed the gridlock in part to a political system plagued by what he called “institutional corruption,” in which individuals aren’t taking bribes or receiving favors, but rather in which the institution itself holds perverse incentives that force lawmakers to spend 30 to 70 percent of their time fundraising, mostly from the richest Americans, and almost inevitably putting those donors’ needs above those of the country at large.

“People typically think of corruption, they think of bad souls, they think of people bribing, or they think of people stealing, or they think of people violating the rules, the law,” Lessig said. “In the sense we’re talking about corruption, it’s not so much bad souls. It’s systems, it’s institutions that begin to allow the wrong sort of influence to evolve or to develop inside the institution. So with Congress, when you have a system for funding elections where members spend 30 to 70 percent of their time raising money from the tiniest fraction of the 1 percent … that begins to corrupt their capacity to actually think about the problems of America, as opposed to thinking about the problems they need to address to keep that tiny fraction of the 1 percent satisfied.”

Trey Grayson, director of the Institute of Politics at the Harvard Kennedy School, said the election has changed little in terms of shifting the power game in Washington. Democrats are still in charge of the Senate, the Republicans still lead the House, President Barack Obama will stay in the White House, and the sense of a political stalemate still looms large. But although the electorate has returned “a lot of the same people” to office, it has also been vocal about its dissatisfaction with “how it’s been” going, said Grayson. The country remains polarized, he acknowledged, but the coming months and years also represent an opportunity for bipartisanship with the potential for the passage of significant legislation around key issues such as energy, immigration, and education.

“Education policy is [an area] where there is a fair amount of bipartisan agreement. I remember when the president unveiled his ‘Race to the Top’ initiative. Newt Gingrich, Arne Duncan, and Al Sharpton went around the country trying to raise the profile. So a lot of what the president is advocating — with increased use of data, using that data in teacher evaluations, a common core standard, but with a lot of states opting in so it’s not totally dictated from the top — with those kinds of principles, I think there is a fair amount of bipartisan agreement.”

“But my ultimate hope is that there is some type of fiscal agreement to — maybe not solve everything — but get us on a good path.”

Challenge of the budget deficit
Faculty members acknowledged that a major immediate challenge is dealing with the federal budget deficit. Skocpol said that Obama, having run on a platform of using both tax increases and spending cuts, has a strong hand. Lisa Randall, the Frank B. Baird Jr. Professor of Science, said that as lawmakers consider spending cuts, she hopes they recognize the importance of reliably funding basic science research and education.

“Every year, we question whether or not we’re going to continue to get funding. That makes us an unreliable partner for international collaborations. It means that big science projects are hard to do,” Randall said. “I realize it’s a trade-off, and it’s a limited budget, … and there’s only so many things in the discretionary budget. But the fact is you throw away a lot if you throw away science education.”

“Look at how many people were excited by the discovery of the Higgs boson [particle],” Randall said. “Why are they excited? Because it’s really new, it’s really progress, it’s moving forward. Not everyone understands what it means. It’s not clear there’s an application. But that we as human beings can find something so new and fundamental about our universe, it’s just an amazing thing. It’s science that you just can’t get any other way. If there was any other way to get it, we would. That’s what the edge of knowledge is.”

A rift over the nature of faith
For the man considered the unofficial keeper of the University’s spiritual health, the election’s narrow outcome points to a deepening divide as Democrats and Republicans balance precariously along a rift over the very nature of faith. The faiths espoused by Americans today, he said, aren’t limited to just religion.

Jonathan L. Walton, Harvard’s Pusey Minister in the Memorial Church and Plummer Professor of Christian Morals, said those faiths in other aspects of American life have been slowly replacing faith in God and in each other. What the country needs, he said, is a “revolution of values” and a “revolution of virtues.”

“When we reclaim the virtues and the values that made this nation great, [like] looking out for your neighbor, making sure that those in the shadows of life — whether it’s the poor, the elderly, the infirm — [are cared for], then I believe that we can really be who we profess ourselves to be as a nation,” Walton said.

He said the election’s result indicates a shift in priorities for voters tired of “rampant inequality,” and those “worshiping at the altars of me, myself, and I.”

Democrats and Republican need to understand, said Walton, that “we are all in this together, and as long as we can strengthen one another, then we are all better for it.”