A Q&A on economic outlook 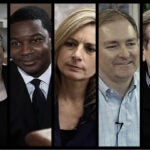 Truth, values, in a reviving America

Kenneth Rogoff, Harvard’s Thomas D. Cabot Professor of Public Policy and professor of economics, is a leading authority on international finance, macroeconomics, and political economy. He served as chief economist and director of research for the International Monetary Fund from 2001 to 2003. In a question-and-answer session with Gazette staff writer Colleen Walsh, Rogoff weighed in on the economic outlook for the United States in the wake of the recent election.

Where do you see the country in two years?

The good news is that the candidate who won [Barack Obama] puts a big weight on the quality of opportunity and trying to reduce inequality in general. And this is just a huge social and political and economic problem in the country. And if we had had eight years like under President George W. Bush, that might have put even more strain on the system. The bad news is President Obama didn’t really articulate a clear plan for growth. The economy is in the doldrums, and is likely to be for a long time.

What we do know is that Obamacare is coming, which certainly is laudable, but it is going to be a big weight on growth. Even if in the long run, it’s in the social interest, in the near term it’s going to be a big thing to digest.

So I think the challenge now is to find a way to try to maintain solid growth. Unfortunately, based on my work with Carmen Reinhart [the Minos A. Zombanakis Professor of the International Financial System at Harvard Kennedy School], I have to guess that it will be very hard to dig our way out fast.

One problem is the big overhang of private debt, public debt, and external debt. Overhangs of this magnitude usually take a decade or more to unwind, though perhaps with better policies and a lot of luck, it might only take us four or five years instead. … The best guess is we will still be growing slowly for long while, with employment improving only gradually.

What do you think it would take to make people feel better? And could a better collective mood itself help spur growth?

Sure, animal spirits matter, but there is a huge overhang of debt, and it’s just not easy to dig your way out of. If one looks at history, including other deep financial crises the U.S. has experienced — not just the Great Depression, but also a few before that — or if one looks at other countries’ experiences with financial crises, it’s hard to see that we are going to be galloping along anytime soon, no matter what the psychology.

During this period, maintaining social stability — having people feel that they are part of the system, that they are not disenfranchised, that they have hope for the future — is actually quite important. Otherwise, we could experience wild gyrations in politics that could be very destabilizing and throw us off track.

The recent election is probably good for stability, since President Obama embodies empathy toward the less fortunate. He is very popular abroad in most quarters. But on the other hand, the Republicans won decisively in the House, so policy will have to be a compromise. Both sides need to work together toward finding a way to dig us out of this a little faster.

Is there a deal to be had in Washington?

There are clearly deals to be had. Unfortunately, we are at a level of dysfunction in Washington. Clearly, some of that’s emanating from divisions in the Republican Party. This game of passing bills all year and then using the debt ceiling to renegotiate everything is a very dangerous development, not just for the present gridlock but potentially in the future, when, say, there is a Republican president and Democratic House. The debt ceiling could become a nuclear weapon whenever the administration and the Congress are divided. This is a fight not just over policy, but over how power is divided among the branches of government.

What is the solution?

I worry we might not come to a solution. Some day, if not on this occasion then perhaps a few years from now, the president may to have to say, ‘OK, then don’t sign it, don’t sign the bill, don’t vote for this bill if you are so insistent,’ and see how the country reacts. Of course, that’s a very dangerous game because then the public might hold the president accountable, even if the president feels he is blameless. Unfortunately, a lot of people in the public think it’s the most natural thing on earth to just cut off the government’s credit very suddenly as a way to force it to pay its bills. The government has a myriad of commitments, which cannot be cut off so easily without huge disruption in ways the public does not seem to understand, but it will when it happens.

What are your thoughts on tax reform?

Well, the president endorsed Simpson-Bowles [the bipartisan commission that recommended spending cuts and higher taxes to trim the nation’s debt]; Mitt Romney endorsed Simpson-Bowles. Right now, that’s the best plan on the table. You can improve it, but the basic idea of drastically reducing deductions and then trying to keep marginal tax rates low is a much better idea than raising marginal tax rates for maintaining growth.

Mitt Romney suggested something interesting in the debates, capping deductions at a fairly low level. That would have a quantum effect. For the very wealthy individuals, he mentioned numbers like capping deductions at $25,000 or $50,000. That would be really quite dramatic. Also, a lot of earned income is disguised as capital gains, and that’s incredibly pernicious in the system. It’s frankly one of the ways great pools of wealth have been created. The ultra-wealthy pay a much lower effective tax rate, and that’s really a deep flaw in the tax system. And I think only drastic simplification of the tax system can prevent that. [In] any system that is complex, the very wealthy, with lots of lawyers and accountants and political pull, will figure out a way to game it. …

For me, Simpson-Bowles doesn’t go nearly far enough. I would like to see a flat consumption tax with a very high deductible, so that you don’t pay any taxes up to a certain level. I would actually fold all taxes into that, even Medicare, Social Security, etc., and have just have one simple tax system. This idea has been voiced by a number of economists; Steve Forbes campaigned on a variant of it in the 1990s. If you don’t have a simple system, it’s too easy to game it.

What will actually happen? I don’t know. Simpson-Bowles was presented as reaching the limits of political compromise. We can hope. It’s highly unpredictable, with certainly a leading chance that they’ll just find a temporary solution and not reach an agreement on more fundamental change.

Do you think the president can actually create jobs without a stimulus package?

Of course it is possible, but it is not all about stimulus. Going forward, you want to try to think of real structural reform that will lead to organic growth, especially in light of the headwinds coming from the introduction of significant taxes to fund the new health initiative.

Tax simplification and tax reform would be really the ideal thing. Of course, there are many others. I’d like to see an infrastructure program and a serious look at education, which needs drastic reform, and I don’t just mean more funding.