A nudge toward better outcomes 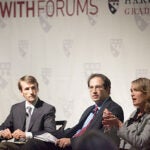 Fresh from spending election night in Chicago, Cass Sunstein, the Felix Frankfurter Professor of Law at Harvard Law School (HLS), gave an audience there a peek at how the Obama administration has applied behavioral economics to regulatory decisions, from streamlining rules to raising fuel economy standards for new cars, to tightening regulations after the subprime mortgage crisis.

Sunstein ’75, J.D. ’78, recently returned to the School more than three years after he left to serve as the administration’s regulatory czar. On Nov. 7, he discussed behavioral-economics concepts, such as libertarian paternalism, choice architecture, and hard and soft paternalism, with real-world applications still at the front of his mind.

Sunstein, a former teaching colleague of Barack Obama at the University of Chicago Law School, was a key leader in applying cost-benefit analysis and insights from behavioral economics to the administration, emphasizing the notion of soft paternalism, or the nudge to encourage people and companies to do desirable things with the most unobtrusive and sparing government action possible. Nudges came into play in everything from health care reform to disclosure requirements to efforts to reduce childhood obesity to cigarette warning labels to measures simplifying regulatory requirements.

A leading thinker in the interplay of law, economics, and psychology, Sunstein countered critics of any and all government intervention by noting that even when government does nothing, there are default decisions that are made by individuals and businesses (and sometimes government itself). Some of those decisions can prove harmful, he said, and government responses might have encouraged better outcomes, particularly if they are not intrusive.

“Behavioral economists have emphasized that in important contexts, people err,’’ Sunstein wrote in “Nudge: Improving Decisions about Health, Wealth, and Happiness.” “Human beings can be myopic and impulsive, giving undue weight to the short term (perhaps by smoking, perhaps by texting while driving, perhaps by eating too much chocolate).”

“Human beings procrastinate and sometimes suffer as a result. They can be unrealistically optimistic, and for that reason make unfortunate and even dangerous choices.”

Free markets protect against such errors by providing countless services to help people to counteract self-control problems, he believes. The market itself creates strong incentives to respond to behavioral problems, and Sunstein writes that with new technologies, those responses will become increasingly helpful, frequent, and inventive.

But in free markets, some sellers attempt to exploit human errors, and the forces of competition may reward, rather than punish, such exploitation. In identifiable cases, such as those involving some credit card, cellphone, and mortgage companies, those who do not exploit human errors will be seriously punished by market forces, simply because their competitors are doing so, and profiting as a result, Sunstein believes. More generally, he said, some policies will not be designed well if they are not informed by what people continue to learn about human behavior.

While the United States has been the world’s leader in using behavioral insights, the conservative British government of Prime Minister David Cameron has also deployed behavior economics on a broad scale. It established a Behavioral Insights Team in 2010, advised by Richard Thaler, professor of behavioral science and economics at the University of Chicago Booth School of Business. Thaler is Sunstein’s co-author of “Nudge.”

Sunstein said that, during his time in government service, he observed that outside interest groups had less impact on government decision-making than is publicly perceived.

Sunstein said that when the government steps in during a financial crisis, it needs to be very careful. While strongly defending nudges, and cost-justified regulation that reduces social risks, Sunstein added some cautionary notes.

“Unduly aggressive controls could prevent a robust process of competition,” Sunstein said. “The central problem with excessive paternalism is that it could in the end make people’s lives worse.”

“The real question is the costs and the benefits of particular approaches, paternalistic or not,” Sunstein said. The way forward is to uncover “opportunities for increasing people’s welfare without compromising the legitimate claims of freedom of choice.

“We will uncover a lot more such opportunities in the future,” he said. “Let’s take advantage of them.”