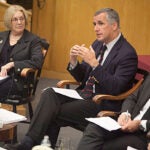 Two years ago, a wave of protests started in the Middle East, and eventually toppled longtime regimes in Tunisia, Egypt, and Libya. Less dramatic results came from popular demonstrations in Bahrain and Yemen. The present violence in Syria is the latest flowering of the movement that came to be known as the Arab Spring.

What has the Arab Spring meant? What is it now? And what comes next? A panel of experts gathered Thursday evening to gamely take up the subject in a Sever Hall classroom. An audience of 70 had groped its way across a darkened Harvard Yard to the event, sponsored by the Mahindra Humanities Center, after a power outage had blackened much of Cambridge. They were “people who have braved the dark to be enlightened,” said Homi Bhabha, director of the center.

The event’s title, “Arab Spring in the Fall,” had a melancholy ring, said Bhabha, an authority on postcolonial world literature. He borrowed another critic’s phrase to describe his own ambivalent feelings about the demonstrations still shaking North Africa and the Middle East: “disappointed hope.”

The panel filled in that double-sided description, outlining an altered region in which certainties are few and mysteries many. There is the tentatively good and the seemingly bad. New governments have held elections, but have so far failed to ratify a single Arab Spring constitution. (The process is stalled in Tunisia. But a proposed Egyptian constitution was finished on the day after the panel, on Friday. It faces a popular referendum as early as midmonth.) Parts of North Africa and the Middle East are witnessing the creation of new machineries for democracy, but the region is also struggling with the lingering effects of departed regimes.

In the absence of certainties, the panel of lawyers, political scientists, and historians supplied perspective. Only one thing is sure: The Arab Spring rose from deep in the past, and the issues it stirred up may be resolved only far in the future. “It’s only two years into the process,” said Khalidi. “It’s far too early,” added Owen, in reference to constitution making. “Let’s come back in 10 years’ time.”

As the Arab Spring was beginning, Owen had just finished the manuscript for his latest book, “The Rise and Fall of Arab Presidents for Life” (Harvard University Press, 2012), a study of the monarchic regimes that for decades dominated North Africa and the Middle East. Each of them, he wrote, was ruled by a narcissistic personality, and represented “a closed world of mutual delusion” — until the Arab Spring.

Clarity will take a long time to emerge, if it ever does. “Historically,” wrote Owen, “the world’s great revolutionary movements have taken years to work themselves out.” Meanwhile, he added in his book, there are lingering issues: What parties will dominate? What will be the role of the military? And what should be done about economic turmoil? During the panel session, Owen pointed to what may be the pre-eminent challenge of the post-revolutionary world: “huge numbers of Arab youth without jobs.”

At the same time, observers in the West need to gain perspective regarding the results of early elections. Owen speculated, for instance, that the ascendency of religious parties may be simply a sign that they are the best-organized groups, and that voters perceive them to be the least corrupt. Khalidi, editor of the Journal of Palestine Studies, said that voting against pre-existing corruption, to many, “seems pious.”

He added his own historical perspective, describing an Arab world whose political landscape had been in “almost complete stagnation” since 1969. The trend then was toward secular, socialist regimes and away from liberal and democratic ideals. But don’t buy the “common bigotry” about the Arab world, added Khalidi, that it has had no experience with democracy, or that Muslims are incapable of embracing it.

To convey the duration of the region’s political stagnation, he remarked on an accidental congruence. The Harvard panel was meeting 65 years to the day after the United Nations voted to recommend Resolution 181, a partition plan to create independent Arab and Jewish states. Since then, Khalidi noted, things have gone well for Israel, in terms of democracy, and poorly for the Palestine region.

But starting two decades ago, change boiled beneath the static surface. By the 1990s, Islamist political trends were emerging, he said, “spreading and prospering” in the wake of the Iranian Revolution, though not wholly because of it. At the same time, said Khalidi, a “cold war” sprang up between ideological rivals Iran and Saudi Arabia, a tension that today adds to the uncertainty surrounding the region’s infant revolutions.

Three main Islamist trends now thread through the Arab Spring, adding to its complexity, said Khalidi. At one end is a “tiny minority” of Jihadist fighters with no respect for the political process, but whose influence belies their numbers. After all, they are armed, organized, combat-hardened, and ruthless, qualities that are prized in, say, Syria. He called that war-wracked country “the most fraught consequence of the Arab Spring.”

On the other end of Islamist political trends stands the Muslim Brotherhood, now most prominently in power in Egypt. Its members are neoliberal and favor making money above all, said Khalidi, because “The profit motive outweighs the prophet motive.” Between these two trends are the Salafists, ultraconservative Islamists whose aim is to impose Sharia law, even in societies, such as in Egypt, where secular liberals remain a potent force.

Ahmed reached the furthest back to paint the biggest picture. He called the Arab Spring the “second phase” of the 20th century’s national liberation struggles, which decades ago suggested to the West a world divided into “a small number of human beings and a large number of natives.” When countries in Africa and elsewhere won independence decades ago, however, it was not real freedom for those “natives.” Instead, autocratic nation-states emerged “to put them firmly in their place,” said Ahmed.

The events of the past two years represent “a continuation of that popular-liberation struggle toward enfranchisement,” he said, and suggest that the unthinkable has happened: The “natives” are in power. “Once the unthinkable becomes thinkable,” said Ahmed, “the genie is out of the bottle.”

Among the consequences of the Arab Spring should be a shift in the way the West views North Africa and the Middle East, a region that is suddenly a font of instruction in the making of modern revolutions. The shift should even change the “language that we use,” said Ahmed, including the word “terrorism,” which “prevents us from seeing what is of value.”

Ahmed’s genie is out of the bottle, but it is not clear how that genie will rule various countries. Among the difficulties facing new democracies is the absence of a tradition of civil society. Ahmed used Egypt’s deposed regime as an example in which “the state occupies civil society and eviscerates it,” he said. “That leaves a space to be filled.”

At the same time, the shadows of those former regimes still hover, equivalent to what Owen in his book called Turkey’s “deep state,” a network of officials and former officials who may someday be ready for counterrevolution. Khalidi seemed to agree, concerning Egypt. “I would be very skeptical of the way the state has retreated.”

At the moment, the Arab Spring may suggest something like Bhabha’s notion of “disappointed hope.” And to the panelists, it certainly remains too fluid to be completely knowable.

The audience got the message that there was no real message in the region yet. The first question from the floor began with a paraphrase of a conversation between logicians Alfred North Whitehead and Bertrand Russell, after a particularly hard philosophical wrangle. “Thank you very much,” said Whitehead mildly, “for laying out the vast darkness of the subject.”