The psychology of poverty 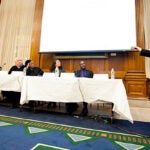 America at a crossroads

To Johannes Haushofer, studying Western college students to understand economic decision-making more clearly will only take economists so far. Sooner or later, those who want to grasp one of the world’s largest economic problems — the plight of the global poor — are going to have to talk to some poor people.

That’s why Haushofer has opened the Busara Center for Behavioral Economics. Located in Nairobi, Kenya, near the sprawling Kibera slum, the nearly year-old center’s mission is to provide researchers from around the world with a facility on a par with behavioral economics labs in developed countries, but with access to Kibera’s residents.

The center, which has a permanent staff of five, is equipped with 20 touchscreen computers that allow experiments with those who either are unfamiliar with such technology or are illiterate. The center has conducted several recruiting drives in Kibera and has a pool of 2,000 subjects willing to participate.

“Behavioral economics tries to understand people’s behavior and preferences,” Haushofer said. “Most experiments in that area are done on Western undergraduates from educated, rich, industrialized countries. There’s already a little evidence that the behavior of [that] group is different from the average world citizen.”

Haushofer is one of the first five fellows in a year-old Harvard program called the Prize Fellowships in Economics, History, and Politics, which is intended to support outstanding scholars in those fields for three years. Haushofer’s work is being undertaken in conjunction with the Massachusetts Institute of Technology’s Poverty Action Lab, one of three research groups affiliated with the fellowship. The others are the Center for History and Economics at Harvard and the History and Philosophy of Political Economy group in Harvard’s Government Department.

Knowles Professor of History Emma Rothschild, a senior fellow in the program and director of the Center for History and Economics, said the program was started because there is a sense that all three fields are changing, making it important to encourage innovative scholarship.

“The idea was to encourage outstanding scholars in related fields to have the space to consider important questions,” Rothschild said.

Although the fellows work independently, they interact weekly with other fellows and with the faculty members who, like Rothschild, are senior fellows. Rothschild said she sees Haushofer regularly, in between his trips to Kenya. This fall, the program admitted its second group of fellows.

“He’s doing something that’s extraordinarily important,” Rothschild said. “I think it will make a major contribution to how we understand decision-making.”

Those much-studied college undergraduates — and the businesspeople they become — may hold much of the world’s economic clout, but a large percentage of the world’s population lives very differently. Some 1.3 billion live in abject poverty, on $1.25 or less a day, and 2.5 billion live on less than $2 a day, according to the World Bank.

The Busara Center is open to researchers around the world. Haushofer is conducting his own research there as well. Holder of a bachelor’s degree in psychology from Oxford University, a doctorate in neurobiology from Harvard, and a second Ph.D., in economics, from the University of Zurich, Haushofer is combining his interests in psychology, economics, and the brain to explore the psychological roots of poverty. Specifically, he’s examining whether the poor think differently about money than those raised in abundance.

“I’m not saying that poor people are stupid, but rather I’m examining whether there’s something about poverty that affects economic decision-making in ways that are disadvantageous,” Haushofer said.

Specifically, Haushofer is examining the role of stress in economic decision-making. Studies have already shown that the poor are more stressed, with higher levels of the stress hormone cortisol. What hasn’t been shown is cause and effect: whether people are stressed because they’re poor or whether there’s something about stress that is helping to make them poor.

Haushofer has studied farmers during times when rainfall fails, finding higher cortisol levels in their saliva. In addition to fieldwork, he is using the lab to conduct experiments designed to raise stress and test decision-making under it.

Haushofer said that fighting poverty is a good way to make the world a better place. Although the world has plenty of big problems, many of them have roots in poverty.

“By fixing poverty, you can fix other things as well,” Haushofer said.