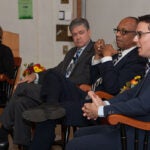 Many readers and viewers wonder if John Osborn Jr. had someone special in mind when he created the imperious professor in his 1971 hit novel “The Paper Chase,” based on his Harvard Law School (HLS) years.

The book centers on “Hart,” an eager young law student, and his tumultuous relationship with an austere contracts professor named “Kingsfield” (played to perfection in the 1973 film by actor John Houseman, who won the Academy Award for best supporting actor).

With a careful reply, the author told HLS Dean Martha Minow and a crowd gathered at Austin Hall Thursday for a discussion about his book that the character was actually a composite of several people. But, he added, “It wasn’t like it was hard to find role models.”

According to Osborn, a 1967 Harvard College and 1970 HLS graduate, 40 years ago the Law School had professors with stern classroom styles and zero tolerance for poorly prepared pupils. Based on that experience, Osborn crafted his curmudgeonly composite, one that has proved popular to generations of readers and moviegoers. The hit movie version, released in 1973, was soon followed by a popular TV series that aired for four seasons in the late ’70s and early ’80s.

Minow, it turns out, is one of those many groupies. “I am a ‘Paper Chase’ fan. It influenced my life, my career — here I am,” said the HLS dean, who asked Osborn a series of questions, including why he wrote a novel while balancing the strenuous workload of a third-year law student.

The decision was threefold, explained the author. At Harvard College, Osborn said he had wanted to pursue writing but was discouraged after being rejected from a poetry seminar by a teaching assistant who told him his poetry was terrible. He returned to writing at HLS in part as a “reaction against the status quo” — his feeling, he explained, that the School “glorified their teachers” over the students.

In addition, the author said he chose to write as a way to “find another narrative” for himself, one that didn’t involve a large Wall Street firm after graduation. Later in the discussion, Osborn laughed while recalling how his fear of being sued over his book’s grim depictions of big-firm lawyers turned to utter surprise when they instead began to thank him for being included in his work.

Osborn said Harvard’s William Alfred, a professor of English literature, helped him work on the narrative and suggested a number of publishers.

In discussing the film, which he called an “almost literal transcription of the book,” Osborn said he worked closely with the movie’s noted cameraman, Gordon Willis of “The Godfather” fame, to help establish the imperious role of Kingsfield by including close-up shots of the gruff professor throughout the first part of the film. In addition, camera tricks and a movable set heightened the sense of distance between teacher and student. As the film progressed, Hart came increasingly into the foreground of the camera’s lens and was finally “right in the frame with Kingsfield,” on a par literally and figuratively with the stern professor, said Osborn.

Reflecting on the choice of Houseman to portray the professor in the film, Osborn said the actor was the perfect fit. “He could be that way; it wasn’t a big stretch for him. He was used to being in control.”

But when it came to the TV series, they had to modify the Kingsfield role to entice a weekly audience to keep watching. “You can’t have a guy who is just nasty through and through,” said Osborn. Instead, Houseman, who reprised the role for the series, offered viewers “a watered-down version” of Kingsfield for the small screen.

Osborn also discussed his work teaching at the University of San Francisco’s School of Law. Instead of relying on the intimidating “cold call” process where a professor simply points to a student and waits for the response to a question, he has his pupils raise their hands, he said, as a way to get them to engage. “Students,” he said, “are not scared in my class.”

First-year HLS student John Wiest heard about “The Paper Chase” only after he was accepted to the School, and his parents made him watch the film. “I was pretty terrified,” said Wiest of his reaction to the movie. “But I had been here to visit, so I was assured that was not reality.”