The making of a stellar president 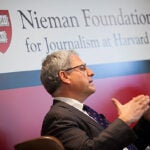 Mukunda looks at past leaders, current candidates to gauge traits that aid success

What makes a high-impact leader? Do the times make the person, or does the person make the times? Those questions have been on many voters’ minds as the presidential election nears.

Gautam Mukunda, an assistant professor of business administration at Harvard Business School (HBS), set out to answer them.

In his new book, “Indispensable: When Leaders Really Matter,” Mukunda attempts to determine what made influential leaders from Abraham Lincoln to Adolf Hitler, from good to bad, any different from others who might have held their jobs.

The answer, he writes, depends in large part on how those leaders came to power. Companies and countries that aggressively root out those who don’t conform to the prevailing system may be able to select competent leaders, he argues, but they’ll rarely select a leader who’s truly transformative.

For all their differences, Barack Obama and Mitt Romney share an important quality: their outsider status as candidates largely unfiltered by years in politics. But the very trait that makes them likely to be high-impact leaders also makes them unpredictable, Mukunda says.

On the eve of Monday night’s third and final presidential debate, staff writer Katie Koch of the Harvard Gazette sat down with Mukunda to discuss Obama’s performance as president, what to anticipate from a Romney administration, and America’s curious affinity for electing outsiders.

GAZETTE: What motivated you to answer this question of whether individual leaders can make a difference?

MUKUNDA: I’ve always been fascinated by that debate. What struck me when I thought about it was that the two sides of the debate were essentially speaking past each other. So the social scientists, who had worked out all the reasons that leaders essentially don’t matter, had come up with a bunch of powerful arguments. But historians had come up with these examples of high-impact leaders that were, to my mind, irrefutable. You can’t plausibly read about the life of Napoleon and believe that he didn’t matter, that he didn’t completely change history.

So what I was intrigued by was the fact that there were two apparently incompatible sets of arguments that were both powerful and clearly right. Yet it seemed like only one of them could be, and was there a way to figure that out?

GAZETTE: Your theory pits this idea of “modal” leaders who come up through a very rigid system — say, military generals, who are filtered over many years before they make it to the top — against extreme leaders, who can rise to power without any significant track record. In the book, you talk about the fact that extreme leaders are more likely to come to power in a system that has infrequent evaluations of its leaders, or that has a winner-take-all system for selecting its leaders. Is the United States an example of that?

MUKUNDA: The U.S. is not winner take all. But it has a group of different phenomena that allow extreme leaders to come to power very often here. America has a nominating process for presidential candidates that’s chaotic. It’s not organized; it just sort of developed over time. It has a tendency to elect people without a lot of time in office. There are a lot of pathways into the presidency that don’t involve slowly rising through the ranks. The U.S. is an example of a system that is extremely likely to elect or to choose extreme leaders, more likely than most democracies.

GAZETTE: Because we have these conditions, do we more often than not choose extreme leaders?

MUKUNDA: Yeah, about half the time.

GAZETTE: How would you evaluate the current political climate in the United States? Where have you found Barack Obama falls on this spectrum?

MUKUNDA: Barack Obama, when he was elected in 2008, was clearly unfiltered, and therefore likely to be extreme. I think his performance has reflected that. Think of the passage of health care reform: It was enormous, had a very large impact on the economy and lots of aspects of the country, was extremely difficult to do, and was unpopular. It clearly cost him political standing. Most politicians don’t do anything that’s unpopular. Would a normal politician have done it? Well, to ask the question is to answer it. No. A normal politician wouldn’t have done it, but he did. Even Bill Clinton, a superhumanly skillful but normal politician, tried it and failed.

GAZETTE: That’s an interesting point about Clinton. People had such high hopes for him when he came into office because he was such a skillful politician. Yet they felt that he failed to push through anything transformative or unexpected.

MUKUNDA: That’s right. Clinton governed as we expected him to govern: as a skillful, centrist Democrat. In some ways he was an Eisenhower Republican. This wasn’t such a bad thing. There was actually a lot of policy continuity between George H.W. Bush and Bill Clinton. They weren’t that different, even though they were from different parties. But obviously George W. Bush was enormously different, and you had a huge swing there.

GAZETTE: It seems to me that, even though that really wasn’t that long ago, having that kind of continuity between administrations would be unthinkable today.

MUKUNDA: The problem when you look at presidents is that the numbers are just not that large, so it’s easy to interpret trends when what you have is a bunch of unconnected events that all fell out the same way.

It is true that this election will pit Barack Obama, who was unfiltered, against Mitt Romney, who is extremely unfiltered. But it’s too soon to know that that’s something we’re likely to have in the future. It might just be that that’s how the last couple of elections broke down. The American political system is just particularly susceptible to having strange things happen. So when a few strange things happen in a row, it’s not a trend.

GAZETTE: You use case studies of past presidents in the book. Are there any other eras in American history that remind you of this election or the current political climate? Any analogies that might be useful to consider?

MUKUNDA: I think the closest one might be Wendell Wilkie versus Franklin Roosevelt [in 1940]. Wilkie started out as a Democrat, made a fortune in business, as Mitt Romney did, and then ran as a Republican in opposition to Roosevelt and the New Deal. Roosevelt was enormously popular, far more popular than Obama, so Wilkie lost in a landslide. But as far as being, in a time of great economic distress, a person whose background is in business and whose policies seem to be broadly supportive of financial interests, and who’s running against a reformist Democrat, that seems like the closest parallel to me.

GAZETTE: A popular talking point is that someone with so much experience as a business executive, such as Romney or Wilkie, has of course been tested in the ways a president would be tested. But by your measure, that person is an extreme outsider to the system.

MUKUNDA: Yes. That’s a common misconception, but it is simply wrong. Politics is different from business. No one would take someone who spent 20 years in the Senate and hire them to be the CEO of General Electric. It’s inconceivable. Yet for some reason, many people seem to think the opposite path is a logical one.

GAZETTE: That seems to be a major point in the book as well, that the criteria you use to evaluate leaders shapes the kind of leaders they become.

MUKUNDA: The way you evaluate people shapes them in two ways. One is that people will change themselves in response to the criteria, and the second is that only those people who fit the criteria will pass through. So they’re the only ones we see anyway. We never actually notice those people who don’t pass through because they never come to our attention.

GAZETTE: Based on all of this, what do you foresee from a Romney presidency?

[Unfiltered leaders] like Romney are likely to do things we would not expect and that no one else in their shoes would do. Such decisions are very likely to have a large impact, for better or worse. Whatever it is he will do, it will matter, profoundly.

Again, my theory is that anything is possible. We just don’t know. It’s hard to think of a case of a presidential candidate about whom we knew less about what they really believed and wanted to do.

MUKUNDA: It’s likely that they do. But it’s neither necessary nor sufficient for that to be true. An event [like the recession] would just shift the odds a little bit.

GAZETTE: Why do you feel it’s important for us to be aware of these qualities — of whether a candidate has come up through the system or not — when selecting our leaders?

MUKUNDA: Picking an unfiltered leader is a gamble. Sometimes gambling is a good idea, but you should always gamble with your eyes open. You should never gamble not knowing that that was your plan.

GAZETTE: And what are those strengths and weaknesses?

MUKUNDA: The strengths of insiders are their knowledge of the system, and their tendency to avoid big mistakes. They tend to do what the experts think is a good idea, or what other people in the same situation would have done. In general, on average, picking an insider is a better choice. Companies that last for very long periods of time tend to pick insiders over and over again. They almost never pick outsiders as their leaders.

Unfiltered leaders, on the other hand, are more effective if you have a rapidly changing situation — if the old systems and processes just won’t work anymore, if you need innovation desperately, or if you’re in some sort of crisis where only genuinely brilliant leadership can rescue you. That’s the time you’ve got to gamble.