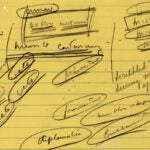 Addressing a packed house at the Harvard Graduate School of Design (GSD) on Tuesday evening, former U.S. Sen. Mel Martinez called for bipartisan solutions to the nation’s housing problems that would largely reduce the role of the federal government and transfer initiative to the private sector.

“After the November election, no matter who wins, it is my hope that Republicans and Democrats will work together to repair the housing market,” said Martinez, a Florida Republican who also was secretary of Housing and Urban Development (HUD) for several years under President George W. Bush.

Affirming the importance of crafting bipartisan solutions, Martinez emphasized his respect for the late Sen. Edward Kennedy, the Massachusetts Democrat with whom he once worked in the Senate.

“Sen. Kennedy was that rare kind of breed who had the ability to maintain his principles and also reach across the aisle to make a deal,” Martinez said. “We often sat around a table and sought to come together on issues.”

Summarizing the continuing ills in housing, Martinez said, “After six years of decline, few would have predicted that the U.S. housing market would still be trying to find its footing.”

While acknowledging that “home ownership is the American dream” and describing his own Cuban-American family’s pride “when we bought our first home in America,” Martinez bemoaned the lack of prudent underwriting in home financing before the crisis, as well as inadequate regulatory oversight of said financing.

“In hindsight,” he said, “it’s obvious there were insufficient controls to prevent practices like reverse redlining,” whereby lenders targeted poor neighborhoods with predatory credit products such as subprime mortgages.

Turning to potential solutions, Martinez began by admitting “there are no magic remedies.” He said that “government is playing far too large a role in our housing finance system” and needs to “allow the private sector to step in and fill the gap.” He called for “circumscribing the government’s role” to one of “an insurance backdrop of last resort.” Martinez was especially critical of a financial system where “profits get privatized and losses get socialized” via taxpayer-funded bailouts.

As for the private sector’s role, Martinez, who is chairman of the J.P. Morgan Foundation, called for more “prudent underwriting” of mortgages. Banks need to be more careful about extending loans to customers with dubious credit histories. He also called for a more robust financial system that “must be able to weather dips in market conditions.”

Martinez reserved much of his time to bemoaning a lack of clarity in new financial reforms like the Dodd-Frank Wall Street Reform and Consumer Protection Act. Pointing to the uncertainty surrounding new financial regulations, Martinez said that “their effect on credit availability could be devastating” for the housing market.

“I have a suggestion for the next president,” Martinez continued. “Issue an executive order to inventory all of these new rules and regulations and assess their overall impact on mortgage lending. We need a much clearer picture” of the impact of these regulations. Most of all, Martinez said, “We must strike the right balance between protecting consumers and expanding credit for qualified borrowers.”

Martinez concluded by reaffirming the importance of housing as a bellwether for economic recovery, and asking that government address the issue right after the election, because, he said, “Housing is just too important to be put off for another day.”