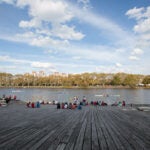 Harvard University, with its 20,000 students and 500-plus buildings, joined the rest of the Eastern Seaboard Monday in getting pummeled by Hurricane Sandy, as the wet, windy, and widespread behemoth rolled over New England like a tank.

On the 210-acre Cambridge campus, the storm peaked from 3 to 8 p.m. Wind gusts of 50 to 60 mph sent periodic bands of rain singing through the air like bullets. On the top floor of the 10-story Holyoke Center, the second-highest campus building, bursts of wind tore past ceiling-high plate glass and created a 12-tone concert of ripping, sawing, and sanding, accompanied by a chorus of sirens from the streets below.

“This is largely going to be a wind event,” said Gary Kassabian at mid-afternoon. He is the University’s managing director of environmental health, safety, and emergency management, one of the hundreds of core personnel who hunkered down through the storm in readiness.

“It’s a well-coordinated effort so far,” said Kassabian from his Blackstone South office. In the same building, near the intersection of Memorial Drive and Western Avenue, is the University’s emergency management center. Against the ripping winds outside, it was a well-lit headquarters of screens, flashing lights, and earnest operators. Center manager John Clougherty was there with a crew of four. A full crew would cover overnight as well.

The center has 414 “fire accounts,” Harvard-owned buildings in Cambridge, Allston, and other parts of Boston that have alarms and other electronics that are monitored constantly. (The center does not monitor Harvard Medical School.) As for electrical power, “the Harvard grid is doing great,” said Clougherty, but by 4 p.m. some Harvard-owned buildings had electrical failures related to power company issues. One NSTAR transformer in Allston, Clougherty said, went out with “a loud pop and a flash.” No students were displaced, however, and dining operations were not interrupted.

Classes and other activities at Harvard were canceled Monday, but the key people who keep the campus gears moving 24 hours a day — emergency or not — were present in full force, at Blackstone and elsewhere. “Harvard never closes,” said Kassabian. Storm or not, students have to be housed, fed, and protected, and Harvard’s vast infrastructure needs constant attention.

On site 24 hours a day are custodial crews, fire safety personnel, utility workers, emergency responders, medical providers at the Urgent Care Clinic, the Harvard Police Department, and other critically important personnel. In that sense, Monday was like any day, “and then some,” said Kassabian, referring to the added layers of staff for the storm. “Harvard is not as susceptible to power outages, since our utilities are primarily underground,” he added. “But we are certainly preparing for the worst.”

On Friday, crews began to remove and store outdoor furniture, and any other exterior objects that in high winds could turn into projectiles. Vendors were put on call in case Harvard needed emergency help from outside. Shelter locations were reviewed in case students or others had to be relocated. Responders reviewed the hurricane safety checklist prepared by Kassabian’s office. “Drills and exercises and learning from past events is key to keeping us well all prepared,” he said.

By Monday morning, full crews of custodians, landscapers, and maintenance personnel reported early to double-check their storm preparations. Officials had extra staffing and supervisors in place for core operations, including fire safety services and utility operations, which oversee the power, steam, and chilled-water distribution. Extra personnel would remain on campus overnight into Tuesday, if conditions dictated. Additional Harvard crews were on standby at home.

“The members of the Campus Services team really are quiet heroes — there are so many dedicated people in our ranks who thrive on ensuring the well-being of the University community,” said Lisa Hogarty, vice president of Campus Services.

As the storm rode in, Harvard emergency management personnel used Web-based tracking systems to monitor any damage, including flooding, leaks, and power outages. When the storm arrived, University officials still expected normal operations for Harvard buses, vans, and garage facilities. Diesel fuel tanks at the fleet yard had been topped off on Friday.

Bob Manning, director of engineering and utilities, confirmed that Harvard’s central electrical grid had experienced no storm-related failures. The grid, with 45 megawatts of capacity, “is like a small town,” he said. In addition, Manning oversees Harvard’s steam distribution system (serving 10 million square feet of Harvard real estate) and chilled-water distribution (serving 6 million square feet). Both systems were unaffected by the storm.

From the outset, Manning’s real concern was widespread flooding, though Sandy failed to bring that to Cambridge and Allston. Overnight into Tuesday, he added, the chief concern was rain blowing sideways, which has a way of entering buildings in unexpected places.

Harvard dining services were fully operational, augmented by supplies brought in last week. But retail food operations were closed. Dudley Café in Lehman Hall remained open, as did the Cronkhite Dining Room on Brattle Street. These operations have a retail component but also serve meal-plan students.

David P. Davidson, managing director of Dining Services, reported a smooth meal operation, despite the storm. Extra crews had been brought in to the commissary operation before the bad weather, so deliveries of soups, sauces, and casseroles — normally made on Mondays — could be made over the weekend. There was no disruption in regular dining services, though dinner was canceled at the Dudley Café, along with late-night snack service at Annenberg Hall.

By late afternoon, Kassabian said that there had been no injuries, that power failures were minor, and that officials were busy assessing what steps to take next.

In aged Harvard Yard, red brick buildings and mature trees tempered Sandy’s high winds. Five freshmen in shorts and T-shirts played an unlikely game of touch football. Finger-sized tree branches, still feathery with leaves, carpeted the ground of Tercentenary Theatre. Everywhere, the wind tipped racked bicycles into slanting piles.  Near the Science Center, a black tarp pegged to a mound of construction dirt fluttered in the wind, cracking like gunfire. Parts of the Yard were as empty and eerie as a horror movie.

Back at the Holyoke Center, the first floor atrium was a welcoming tube of light, warm and fragrant. Oggi’s restaurant had stayed open, a rare retail holdout in the square. “We’re the only ones who don’t care about storms,” said Elvett Welch, standing behind the cash register. “Oggi fears no storm.”