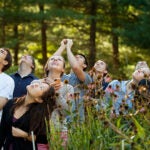 Every 90 seconds, a mother dies in pregnancy or of childbirth complications — a tragic statistic, but one that may drive efforts to improve health care in developing countries, experts gathered at the Harvard School of Public Health (HSPH) said Friday.

Protecting women in childbirth remains one of the world’s biggest and most intractable health problems, HSPH Dean Julio Frenk said at The Forum at Harvard School of Public Health. Of the United Nations’ eight Millennium Development Goals, reducing maternal mortality has proven the most difficult to make progress on.

Progress has been slow not for technical reasons. Developed countries discovered long ago the interventions that save the lives of mothers. Instead, it has been difficult because the women dying overwhelmingly live in the world’s poorest nations, with little access to the facilities, procedures, and expertise that could save them. Ninety-nine percent of maternal deaths are in developing countries. Ninety percent could have been prevented, panelists said.

“Those complications happen to women everywhere. What makes the difference in life and death is access to quality medical care,” said Ana Langer, professor of the practice of public health and coordinator of the HSPH’s Dean’s Special Initiative in Women and Health.

Langer and Frenk were joined at the event by Christy Turlington Burns, director and producer of a documentary dealing with the subject — “No Woman, No Cry” — and founder of the nonprofit Every Mother Counts. Lisa Belkin, senior columnist on life, work, and family for The Huffington Post, moderated the discussion.

Although the number of women dying of childbirth-related complications remains too high, progress is being made. After being stuck at about 500,000 annually for many years, maternal mortality has fallen since maternal health was highlighted as a Millennium Development Goal in 2001, to 280,000 in 2010.

Turlington Burns began researching the issue nine years ago when she suffered a postpartum hemorrhage after giving birth to her daughter. She received appropriate care and recovered, but the incident made her wonder what happens to other women around the world. She traveled to a range of countries to detail the problem in her film.

A focused effort to prevent maternal mortality can provide multiplying benefits, panelists said. Not only can saving the life of the mother impact the life of her baby, it also has deep effects on the lives of her other children and her community. Women make many of the health care decisions in a family, and their labor provides economic benefits that extend beyond the household.

It’s important to recognize social factors that make the problem difficult to reach, Langer said. “Women are not considered an asset valuable enough to invest in,” she said. “There needs to be a change in the mindset of people.”

Communities have to recognize when a pregnant woman might be in distress, understand that there might be complications, and make sure transportation to a clinic is available.

The discussion also touched on the HSPH initiative that Langer heads. The program, she said, is working in several African countries, as well as India and Mexico. Its focus is to improve the quality of maternal care in countries where health systems are developed enough that women might be able to get to a clinic, but where that clinic might be low on supplies, be low on blood, or lack trained personnel.

In addition, the initiative fosters training and interactions among health care professionals in the developing world.

Panelists said several approaches have proven effective so far. Conditional cash transfers to women have given them an incentive to deliver in clinics rather than at home. The World Health Organization’s safe birth checklist, developed at Harvard, provides a low-tech way to ensure steps that increase a woman’s chances of surviving childbirth. Family planning, an approach that is controversial in some nations, also provides a way to reduce maternal mortality. It works by reducing pregnancies among women who are too young or too old to safely carry and deliver a baby, and by increasing the interval between births. Fewer pregnancies mean fewer opportunities to develop complications, Langer said.

Because so much is known about maternal mortality and how to address it, nations that make the issue a priority can see dramatic progress, as has been the case in India, Frenk said.

“All of this is well within our reach,” Frenk said. “It is difficult, but it can be done.”

To view additional webcasts from The Forum Harvard School of Public Health, visit its website.