Inside the Supreme Court 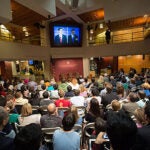 Political pundit, author, and U.S. Supreme Court watcher Jeffrey Toobin offered an inside look Thursday at the nation’s top judicial body, which he described as divided politically but cordial personally, during a discussion at Sanders Theatre.

Toobin ’82, J.D. ’86, a commentator on CNN and a New Yorker staff writer, delivered entertaining anecdotes, as well as a brief history of the court, and predictions about its future during the session, which was sponsored by the Harvard Institute for Learning and Retirement.

The author of six books, including “The Nine: Inside the Secret World of the Supreme Court,” Toobin traced the court’s evolution over the past 40 years from a liberal body to one deeply divided along partisan lines with “five Republicans and four Democrats.”

“If you remember one thing about the Supreme Court from my talk, one thing that matters, that’s it,” said Toobin.

In the 1960s there were seven liberal judges on the court, which led to a series of liberal landmark rulings. When President Richard Nixon, who was only in office for just over five years, was able to name four justices, many observers expected the court to shift dramatically to the right, but that didn’t happen. “The ’70s were nearly as liberal as the ’60s at the Supreme Court,” said Toobin of an era that included the historic decision in Roe v. Wade, “a 7-2 opinion that said states could no longer ban abortion.”

He said the court’s shift to the right began with President Ronald Reagan and one of his top advisers, Edwin Meese, who was eager for justices who would promote “the conservative agenda.” In addition, a corps of young Republican lawyers anxious to be part of the “Reagan Revolution” had recently arrived in Washington. Top among them were John Roberts and Samuel Alito, future Supreme Court justices.

Yet a firm shift to the right was still far away. Reagan vowed to appoint the first woman to the court and did so with Sandra Day O’Connor, who was by no means, said Toobin, a “social or religious conservative.”

Even into this century, the court leaned leftward.

O’Connor retired in 2005 to take care of her ailing husband, and Bush nominated the conservative Alito. That addition, said Toobin, has meant “a dramatic difference in approach, and we have seen how the Supreme Court now very much reflects the modern Republican Party.”

The change, he said, is evident in the second landmark case, Citizens United v. Federal Elections Commission. In that decision, the court, now led by conservative Chief Justice Roberts, whom Bush had appointed, ruled that corporations and unions are protected under the First Amendment on free speech and thus can make unlimited campaign contributions. Toobin said that decision is likely just the beginning of a continued overhaul of campaign finance regulations and that the court is “continuing to strike down restrictions on how money is spent.”

The third landmark case appears to be something of an anomaly. The court upheld President Barack Obama’s health care overhaul in June, with an unlikely swing vote coming from Roberts. While the decision does not herald another shift left for the court, said Toobin, it does offer important insights.

“John Roberts is still conservative. He did not discover his inner moderate last June,” said Toobin, adding, “I assure you as we go forward … John Roberts will be the conservative that President Bush wanted him to be.”

But the chief justice, said Toobin, considers himself  “the custodian of the court’s public reputation, and Roberts did not want to see the court permanently consigned to the partisan hell that Congress lives in all the time,” so he found an argument that would uphold the law.

Toobin’s favorite Supreme Court justice is the recently retired bachelor from New Hampshire, Souter. Appointed by President George H.W. Bush, Souter, who turned out to be more moderate than many, including Bush, anticipated, was, in Toobin’s words, “just so weird.”

But Souter, said Toobin, also had a wonderful sense of perspective on the private and public life of a Supreme Court justice, and a great sense of humor. When someone once confused him with Associate Justice Stephen Breyer, Souter played along, not wanting to embarrass the man in front of his wife. When the man asked him what was best about being on the court, Souter replied, said Toobin: “I have to say it’s the privilege of serving with David Souter.”

Toobin also told anecdotes about the court in the past, when many justices actively disliked one another. Decades ago, when Associate Justice William O. Douglas’ car went over a cliff in a serious accident, court watchers wondered, “Where was [Associate Justice] Felix Frankfurter?” The two men had a contentious relationship.

Under Chief Justice William Rehnquist in the 1980s, the court’s workload decreased significantly, said Toobin, which helped to make it a more “congenial” place.

Toobin also offered his perspective on the court’s quietest member: Associate Justice Clarence Thomas. “There are eight justices who are very engaged and very prepared and ask lots of hard questions,” he said, “and Clarence Thomas never says anything.”

But according to Toobin, the laconic Thomas, whose streak of not asking public questions is now in its seventh year, is lively and engaged with other justices during oral arguments. “Thomas is not an isolated or unpopular or uninfluential figure at the Supreme Court, … just for his own bizarre reasons he chooses never to ask any questions.”