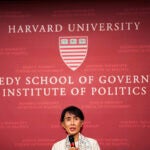 Panel sees presidential race firming up, with Obama ahead for now

A panel of political journalists shared their insights with Harvard faculty members on Thursday, including their predictions about the outcome in the race for the White House, with a couple of speakers seeing the race as Democrat Barack Obama’s to lose, but another saying that Republican Mitt Romney might yet find an opening to win.

“I think the campaign is over,” said Ryan Lizza, Washington correspondent for The New Yorker. “Absent some very significant development, Barack Obama is going to be re-elected.”

But with polls showing Obama with a lasting lead, Washington Post columnist Eugene Robinson joked that he is now forced to take extreme measures to get people to keep reading his work. “At this point I just get down on my knees and beg,” he said. “I’ll clean your house. Please read The Washington Post.”

The event, “Press and the Race: A Presidential Election Roundtable,” was hosted by the Nieman Foundation for Journalism and the Office of the Senior Vice Provost for Faculty Development and Diversity (FD&D), and was the first such faculty gathering of the semester.

Some participants doubted that even the upcoming presidential debates will allow Romney to eliminate the small but significant lead that Obama shows in key polls, with just a small percentage of the electorate still undecided.

“Debates get a huge audience,” said Lizza. “But we’re all just coming to those debates rooting for one side or another.”

“What I’m going to look for is: What is the moment or the place where Mitt Romney decides that he’s going to try to shake Obama, to somehow get him off his game?” Harwood said. “It is very difficult to make up those points in the time remaining.”

The panel was moderated by Jill Lepore, David Woods Kemper ’41 Professor of American History. Lepore, whose recent New Yorker article called “The Lie Factory” is about the origins of the political consulting business, encouraged the panel to compare and contrast the political spectacles of the past and present.

She said that political conventions, for instance, are an artifact of the 19th century. What were once raucous decision-making meetings are now considered by many to be just three-day-long infomercials. Nevertheless, in this presidential election, the conventions helped out as game changers.

“The Democrats put on a really great infomercial,” Robinson said. “And the Republicans put on a lousy one.”

Absence of women as political journalists

Lepore called attention to the fact that despite the many changes in political reporting over time, one thing is a constant: “the almost complete absence of women as political journalists and commentators,” which is something that she later admitted “infuriates me every day.”

As the only woman onstage, she pointed out: “We are an interestingly composed panel right here. What’s going on with that?”

Harwood suggested that the dearth of women political reporters might have something to do with the general difficulties women face in dealing with work-life-family balance. Robinson noted that there remains a “boys’ club feel” to political pack journalism on the campaign trail and at conventions that “could be more than off-putting” to women.

Lizza, however, recognized a group of about a dozen “really, really important female reporters who are on the Romney and Obama campaigns” this year, including Ashley Parker at The New York Times, Maeve Reston of the Los Angeles Times, Maggie Haberman at Politico, and Marin Cogan at GQ.

The changes that have swept political journalism include the speed and the multiplicity of outlets.

“Is there any way that these are part of the public good?” Lepore asked.

Harwood criticized his own medium, decrying that there is “so much baloney on cable TV.” Lizza argued that Twitter and the like have made journalism more transparent. “You can know what people who are covering these campaigns are doing and thinking more than you ever could before.”

Lizza spoke about the susceptibility of reporters on the campaign trail to what he called “political consultant criteria,” thereby looking at everything in terms of whether it is good or bad for the candidate, rather than whether it is true, or good for the country.

“The values of the political consultants and strategists … have really been internalized,” Lizza said. “That’s really infected political journalism.”

And how warped are those values? As a case in point, Harwood described talking to a Romney strategist who told him: “What’s really killing us now is the rise of the proportion of people who think the country is going in the right direction.”

Dan Froomkin writes about watchdog journalism for Nieman Reports and is the senior Washington correspondent for the Huffington Post. He previously served as deputy editor of NiemanWatchdog.org, which now exists as an online archive of articles on accountability journalism. Watch the webcast of “Politics as Theater: A Panel Discussion Preceding the First 2012 Presidential Debate.”