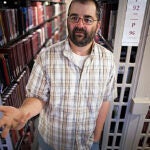 Literary scholar Roger Chartier took on the question of “When and Why Do Literary Manuscripts Matter?” at the Radcliffe Institute for Advanced Study on Oct. 18, exploring the creation of literary archives and the appearance in the 1750s of authorial manuscripts.

A French historian and historiographer, Chartier, whose talk was co-sponsored by Radcliffe and Harvard’s Mahindra Humanities Center, is directeur d’études at the École des Hautes Études en Sciences Sociales in Paris, professor in the Collège de France, and Annenberg Professor of History at the University of Pennsylvania. His work examines the history of books, publishing, and reading, with a recent focus on the intersection of written culture and literature.

In opening remarks, Harvard’s Ann Blair, the Henry Charles Lea Professor of History, who helped organize the event, called Chartier “deeply historical in his thinking, always sensitive to the gap between then and now.”

Chartier explored the history of the autograph manuscript, the kind written by the author, and the reasons behind its absence prior to 1750. “The decisive role of scribes in the publication process is one of the reasons for the loss of authorial manuscripts in early modern times,” he said.

Offering Golden Age Castile as an example, Chartier said manuscripts that made their way to the royal council for “license and privilege” had in fact been written by professional amanuenses, or transcribers, and simply corrected by the authors. Those versions were then further modified by censors, and ultimately sent to printers, where additional changes were made.

“Once the scribal copy of the autograph manuscript entered the printing shop, it was further prepared by the corrector, who added accents, capital letters, punctuation, and casting-off marks. … Thus prepared and corrected, the manuscript copy was composed and printed. After these textual interventions made by the copyist, the censor, the copy editor, and the compositors, the autograph manuscript lost all importance.”

Chartier spent a week at Harvard, where he met informally with faculty, students, and Radcliffe fellows. The timing of his visit and talk was ideal, said Radcliffe Dean Lizabeth Cohen, who introduced the event. Cohen said that the humanities program at Radcliffe has long been exploring the subject of books and manuscripts. The institute’s 2010 conference, “Why Books?,” examined the history and future of the book in the digital age, and its upcoming two-day session on Nov. 1 and 2, titled “Take Note,” will “consider the past and future of note taking and the critically important way that individuals make new knowledge their own.”

Following the talk, Chartier took part in a discussion with Harvard faculty, moderated by Homi Bhabha, Anne F. Rothenberg Professor of the Humanities and director of the Mahindra Humanities Center.