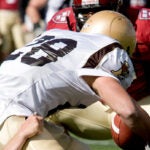 If a jetliner carrying 260 African-Americans crashed every day for a year, the toll would approximate the impact of unequal access to health care and the resulting poorer health outcomes on the nation’s African-American community.

Such health disparities also affect Latinos, Asian-Americans, American Indians, and other minority groups. Collectively, their illnesses and premature deaths not only devastate loved ones, they also carry an enormous economic cost, more than $1 trillion from 2003 to 2006, according to a 2009 report by the Joint Center for Political and Economic Studies.

Such stark statistics were offered to illustrate the stubborn problem of disparities in health between America’s white and minority communities during a University-wide symposium at the Center for Government and International Studies’ Tsai Auditorium Thursday.

“It is a social justice issue,” said symposium panelist David Williams, Norman Professor of Public Health at the Harvard School of Public Health and professor of African and African American Studies and of sociology in Harvard’s Faculty of Arts and Sciences (FAS). “It’s also a drain on the economy.”

Though the problem manifests itself in measures such as lower life expectancy and disease rates, its roots reach past doctor offices and medical clinics to the country’s urban neighborhoods and vast Indian reservations, panelists said. Beyond medicine and public health, it touches on a complex array of issues — racism, economics, poverty, public policy, taxation, and even history.

“Health disparities are not new. They didn’t appear in America in 2002,” said Harvard College Dean Evelynn M. Hammonds, the Barbara Gutmann Rosenkrantz Professor of the History of Science and of African and African American Studies. Hammonds referred to a 2002 report by the Institute of Medicine on health disparities that has been credited with bringing the issue to the fore. She pointed out that not only has the issue existed for centuries, it was examined more than 100 years ago by W.E.B. Du Bois.

Provost Alan Garber delivered introductory comments, saying progress on the issue has been “frustratingly slow,” partly due to a lack of data for analysis. That has changed in recent years, however, and new information is available — in disciplines from the social sciences to genomics — that can be brought to bear. Research and action now need to move in sync, he said.

Though statistics describe a continuing gap between the health of whites and minorities in America — not until 1990 did blacks attain the life expectancy whites had in 1950, for example — several panelists cited the large amount of money the United States already spends on health care, recent moves to overhaul the health care system, and the presence of effective examples of low-cost, high-quality care as encouraging for the future.

Donald Berwick, former administrator of the federal agency that administers Medicare and Medicaid and a lecturer on health care policy at Harvard Medical School, said though the health care debate is often described in terms of scarcity —who gets it and who doesn’t — he views it as a situation of abundance, with the difficulty being designing a system that cuts costs and improves care while spreading that abundance equitably.

The U.S. health care system already has enormous resources, he said, and is steadily gobbling up more. He described the system as “a thief” stealing resources from other sectors, such as education, that can ill afford to lose them.

Berwick said he is optimistic because there are several examples of innovative programs that provide good care at lower cost. He cited the Nuka system in Anchorage, which has seen emergency room visits drop by 50 percent, hospital admissions drop 53 percent, and specialist visits drop 65 percent since it was instituted.

“Care that meets the needs talked about in this symposium is possible,” Berwick said. “I think we have plenty of resources in this country to make improvements.”

A major problem, however, is inertia, Berwick said, with large entrenched interests dragging their feet on change.

Paul Farmer, the Kolokotrones University Professor and chair of Harvard Medical School’s Department of Global Health and Social Medicine, echoed Berwick’s optimism even as he pointed out that health disparities aren’t restricted to the United States. Still, he said, modern medicine provides a huge array of tools to fight disease that weren’t available to generations past.

The experience of the nonprofit Partners In Health, which Farmer co-founded, shows that large health improvements are possible as long as systems are designed to make care effective. For chronic diseases, Partners In Health has pioneered a system dependent on community health workers who regularly visit, counsel, encourage, and monitor patients at home, while also making use of community clinics and hospitals for more serious conditions.

Though causes of the problem are complex, if understood, they can signal avenues of attack. The higher prevalence of asthma among some minority populations can be explained by higher exposure to diesel fumes in housing close to bus depots, for example. Alexandra Shields, director of the Harvard/MGH Center on Genomics, Vulnerable Populations, and Health Disparities, said that although at its root that may be a problem of poverty and racial segregation, physicians and public health advocates can provide regulatory agencies with ways to go after the particle pollution linked to the health problem.

“When you understand the mechanistic contributors to disease, that’s how we can go after social stratification,” Shields said.

In response to a question from the audience about how to attack such a huge problem, Berwick said that the problem’s size also means there’s lots to be done.

“There is so much to do, do what you can do,” Berwick said. “Don’t feel guilty — just get started.”