An issue that’s bigger in Texas 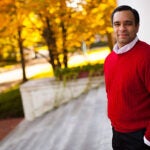 The making of a stellar president

The controversial question of what role race should play in college admissions, if any, stands again before the U.S. Supreme Court in the case of Fisher v. University of Texas. Two leading legal scholars discussed possible consequences of a decision in that case as part of the Askwith Forum last week at the Harvard Graduate School of Education (HGSE).

Lani Guinier, the Bennett Boskey Professor of Law at Harvard Law School (HLS), teamed up with Tomiko Brown-Nagin, a professor of law at HLS and a professor of history at the Harvard Graduate School of Arts and Sciences (GSAS), to explore the legal background and possible outcomes of the Fisher case, which was argued recently.

Brown-Nagin began by tracing affirmative action cases back to the court’s 1978 Bakke case, involving the University of California, and the 2003 Grutter case, involving the University of Michigan’s Law School. In Grutter, Brown-Nagin said, “Justice [Sandra Day] O’Connor brokered a split [5-4] decision … deciding that the law school’s policy withstood scrutiny and thus race could be a plus factor in a holistic process” of admissions. Given the determination that race could be considered as one factor among others, why is the issue back nine years later?

Brown-Nagin listed three factors, two having to do with the court’s right-leaning makeup and the last concerning weaknesses in O’Connor’s 2003 decision, which “left itself open to the kind of challenge we see today in Fisher.” Brown-Nagin said that although O’Connor confirmed diversity as an educational value, her concept of exactly when “a critical mass” of diversity exists was left largely undefined. In addition, her “notion of diversity is insufficiently tethered to a concept of social justice” and misses a vital historical perspective on race discrimination in America, Brown-Nagin said.

Brown-Nagin concluded by suggesting three possible outcomes in Fisher. In the first, “the court might overturn Grutter,” although “Chief Justice [John] Roberts is rightly concerned with the court’s institutional integrity,” which could be damaged by overturning the much-publicized 2003 ruling. Or the court might “strike down the University of Texas’ policy as insufficiently narrowly tailored.” Or, given that Justice Elena Kagan has recused herself from the case, it could end in a 4-4 tie, which would uphold the circuit court’s ruling in favor of Texas, though Brown-Nagin added that “I’m skeptical of this [scenario] after reading the transcript” from the oral arguments.

Guinier then spoke passionately about the long history of discrimination in Texas, examining several prior Supreme Court cases invalidating Jim Crow laws in the state. “Unlike other cases,” said Guinier, “the Fisher case is in a Southern state that was a member of the Confederacy and has yet to purge itself of that legacy.”

She noted that the University of Texas’ Austin campus has several monuments to Confederate leaders. She highlighted one such honoree, Col. William Steward Simkins, saying, “He organized a Ku Klux Klan effort, along with his brother, in Florida, and they were responsible for the killing of 25 free blacks.” Later, Simkins became a professor of law at the University of Texas, where a bronze bust of him remained in the law school’s library for decades.

Guinier detailed a number of landmark Supreme Court cases in the 20th century that declared Texas’ policy of educational segregation in violation of the Constitution’s 14th Amendment granting citizenship to all Americans. Several of these Texas cases, said Guinier, expressly confirmed that the 14th Amendment was drafted with the specific purpose of protecting the rights of recently freed blacks.

“The originalists on the court now seem to have forgotten the original intent of the 14th Amendment,” Guinier dryly noted.

The University of Texas continues to be a place where minority students feel unwelcome, Guinier asserted, quoting an African-American student as saying, “I was the only black in a class of 100 and constantly stared at like I was in a museum.” She also quoted a Latina student as saying, “It’s hard for me to speak up in classes when only whites are around me.” Guinier suggested that what the university is attempting to do with its current “holistic review” process is “to change the present” chilly climate for minority students, and she suggested that they should be allowed to do so.

In response to a question about weaknesses in O’Connor’s 2003 Grutter decision, Brown-Nagin said: “We should talk about discrimination and its effect. We should be correcting for historical injustices. … The history matters,” especially when it comes to Texas.