America at a crossroads 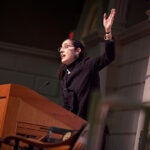 An issue that’s bigger in Texas

At stake in the next election is nothing less than a redefinition of America’s priorities, according to Harvard scholars taking part in a panel discussion at the Barker Center.

Offering both historic and contemporary perspectives on the current election, several faculty members reflected on how themes from America’s recent and distant past are playing out on today’s national stage during an Oct. 16 panel discussion.

The national mood is strikingly similar to that of a century ago, when the majority of Americans were disillusioned with the “vast inequalities of wealth and power” in the United States, said Alexander Keyssar, Harvard Kennedy School’s Matthew W. Stirling Jr. Professor of History and Social Policy.

That unhappiness led to creation of what Keyssar deemed a “grand bargain” of the late 19th and early 20th centuries through institutional reforms involving corporate regulation, unionization, social insurance provisions, and universal suffrage.

But in recent decades, that bargain has come under attack, largely from Republicans, but also from some Democrats, he said, who have done things like pass voter identification laws and dismantle significant parts of the Glass-Steagall Act of 1933, which limited the power of commercial banks. As a result, President Barack Obama has had to play the role of a “strategic conservative” trying to preserve the status quo, while Romney and his party “seek dramatic movement back to the 1890s.”

What’s fundamentally at stake with the election, said Keyssar, is “whether that ‘grand bargain’ will be further eviscerated, whether those basic institutional structures will be more completely dismantled.”

Annette Gordon-Reed, Carol K. Pforzheimer Professor at the Radcliffe Institute, said the election comes down to a basic question of “what kind of nation the American people think they are.”

Gordon-Reed, who is also the Charles Warren Professor of American Legal History at Harvard Law School (HLS), said the question could be traced back to a fundamental philosophical difference between Founding Fathers Alexander Hamilton and Thomas Jefferson. The former admired Europe and sought a more robust role for central government in American life, while Jefferson envisioned the United States becoming a “completely different place.”

Those conflicting visions, she said, have persisted and put the nation on a kind of “track,” one in which many consider the present-day European vision of a social safety net as un-American and “oppressive, as opposed to something that is helpful, or a right that people share.”

The differing perspectives can also be tied to race, and a belief that minorities “will be the primary beneficiaries … of the welfare state.”

The irony, said Gordon-Reed, is that Obama, who as an African-American man ­­is a member of a minority group, finds himself in the position of defending his largely “conservative” health care plan. Yet conservatives still see that plan as “engaging in an enormous power grab.”

Today’s situation is similar, he said, but is playing out in slightly “different terms.” According to Mack, the Democratic Party continues to be interested in government intervention in the economy, but has adopted Republican talking points about the need to reduce the deficit and debt.

When adjusted, the dollars spent per vote cast in the 1896 presidential race between Republican William McKinley and Democrat William Jennings Bryan dwarfs the spending from 2008 and even 2012, said Jed Shugerman. Such “through-the-roof spending,” said the HLS assistant professor of law, declined in the decades that followed the 1896 election.

The likely reasons for the drop-off included McKinley’s win, which represented a “victory over the socialist threat,” the sense from donors that they had overspent on the campaign, and an economic downturn.

But Shugerman said the current levels of campaign spending won’t decline in the same organic fashion after the 2012 election. Instead, reducing the money spent on elections would require shifts like “a change in corporate law …  that would require shareholder votes in order for companies to spend their money” backing candidates.

Asked about eliminating the Electoral College, a move suggested whenever its tallies come close to overshadowing the popular vote, Shugerman warned of potential pitfalls. To be foolproof, such a change would require more accurate voting technology, he said, to avoid a predicament like in Florida during the 2000 election, when officials had to pore over paper punch ballots, as well as the many problems associated with computerized voting machines.

“Imagine a national recount and how bananas that would be. … We need national solutions if we are going to have a national election.”