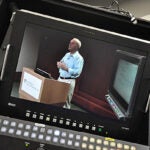 When Gary E. Knell took over as CEO of NPR in 2011, his assignment was clear, if daunting: “to provide an economically sustainable platform for journalists.”

Knell, who spoke at the Nieman Foundation for Journalism on Monday, joined NPR at a time when the organization faced not only internal strife, but also a business environment still reeling from a decade of digital disruption. His response was that of a realist.

“You can’t stop technology. People will demand programming when and where they want it,” Knell said. “To not be in the digital space means you’ll be replaced. And you’ll never come back.”

To kick-start development of a “content depot,” Knell hired a chief content officer to wrangle all of NPR under one content roof. He stressed that NPR will always be radio first, but that consumers are demanding more. “Radio is from where we came, and it’s where we’ll go,” he said. But multiplatform technology now allows NPR to “take deeper dives” with stories and quench a “growing appetite for storytelling.”

As an example, Knell pointed to Morning Edition’s special series “Revolutionary Road Trip,” which sent Steve Inskeep on a journey across North Africa. The series included stories about the region’s food and music, and even Egyptian political humor. With audio, video, and photography, NPR.org covered the story in a way a single platform couldn’t have.

Another innovation: Internet radio-embedded cars. NPR and Ford have collaborated to bring NPR stations to Ford Sync drivers whenever and wherever they want to listen.

Demographic changes like these help point the way for NPR. Knell quoted hockey great Wayne Gretzky: “I skate to where the puck is going, not where it is.”

This shift toward mobile content may also help NPR expand its minority audience. African-American and Latino audiences use mobile devices to access the Internet at a higher rate than their white counterparts. This is especially true among 18- to 29-year-olds.

Reaching a wider audience on a growing number of platforms isn’t cheap, however. And the growth of the Internet has left the news business in flux, with its traditional routes to revenue blocked.

“Advertising and subscriptions drive all media,” Knell said. As it happens, NPR’s subscription rate is voluntarily set. Three and a half million people donate each year, Knell said. That’s about 10 percent of all listeners — a rate of return many other news organizations wouldn’t mind, he said.

But it’s being able to innovate while preserving journalistic integrity that will sustain NPR.”

“NPR is a legacy organization,” Knell said. “You can’t fall in love with your legacy. It’s important to respect and honor it, but you need to be able to transform in the modern context.”