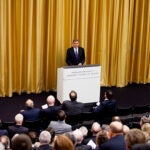 The man who helped to reshape the country’s largest school system has a new focus: the nation’s K-12 public schools.

Joel Klein, the former chancellor of the New York City Department of Education, spoke at the Harvard Graduate School of Education on Monday, outlining his plan for a “transformative” approach to the country’s ailing primary and secondary education systems.

“Human history is a race between education and catastrophe,” said Klein, quoting British author H.G. Wells. According to Klein, catastrophe will be unavoidable without major restructuring of the American K-12 system. His proposed solution has three core recommendations: Professionalize teaching, create choice and competition among schools, and bring technology further into classrooms.

Klein instituted many changes in New York City’s public school system when he was chancellor from 2002 to 2010, including implementing teacher performance bonuses, establishing more charter schools, creating a unified and citywide curriculum, incorporating data into teacher evaluations, and closing some high schools in favor of smaller, community-driven schools.

He shaped his national proposal in part on that experience, and in part on an influx of depressing educational data.

“The facts are pretty gruesome,” said Klein, who rattled off statistics, including a high school graduation rate in the United States that hovers around 70 percent, the country’s low literacy ranking in science and math internationally, and the fact that although U.S. spending has tripled since 1970, student achievement levels remain almost unchanged.

But change is possible, said Klein, in part because so many teachers will be retiring from the profession in the next decade, making way for “millennials who I think will be much, much more accommodating to a new and different vision of the system.”

In addition to fueling innovation and driving change, enhanced choice and competition among schools is a basic question of equity, Klein said. Every parent, regardless of income level, should be able to pick from the best schools available, Klein said. He cited his own efforts in New York City where he shut 60 failing high schools in favor of 300 smaller, community-based models that he said led to both greater choice and higher graduation rates. Too often, Klein said, parents tell him the schools they don’t want their children attending are for “other people’s children.”

“Other people’s children are the kids who start out with the least advantages in life and the greatest challenges. They can’t move to a new neighborhood, or a new community, or send their kids to private school. For them, it’s truly one and done.”

The system should not be about pitting a private or public school against a charter school, added Klein, “It’s about choice, and good schools, and schools earning the student body that attends them.”

“We have got to create a teaching profession that is a highly respected profession,” said Klein. He complained that too many teachers leave teaching after only a few years, and called both for new measures that ensure they are adequately trained both in content and pedagogy, and for a system that includes better support and pay.

Klein singled out the example of Finland where it’s harder to “get into a graduate school of teaching than any other professional school.” Finland’s educational system includes a mentoring program in which teachers are carefully supervised. If they are deemed underperforming, they are “counseled out of the system.”

Klein now heads the education unit of media mogul Rupert Murdoch’s News Corporation, called Amplify, which in part aims to put tablet computers in the hands of teachers and students across the country.

With his final words, Klein challenged his audience to help him.

“This is the Harvard Graduate School of Education. Where else is a better place to reimagine education, to have big thoughts about the transformative power of three ideas?”