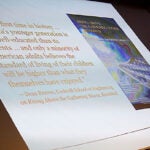 On big night, strategists weigh in at Kennedy School on debate prep

Presidential debates make for great political theater, a passable night of television viewing for even the most apathetic voter. But for the candidates, they’re the culmination of weeks of rhetorical blood, mental sweat, and, sometimes, literally tears.

In other words, a group of veteran presidential preppers said at Harvard Kennedy School (HKS) Wednesday night, Barack Obama or Mitt Romney might be forgiven for betraying brief signs of fatigue or annoyance in that evening’s first presidential debate.

“They go through the same frustrations that you or I might go through,” said Brett O’Donnell, an Institute of Politics (IOP) fellow and political strategist who has worked with Michele Bachmann, Romney, and other Republican presidential hopefuls. “We put them through a lot.”

O’Donnell joined a trio of political and media insiders for “From Prep to the Podium,” a behind-the-scenes look at the work that goes into training candidates for the debates. The discussion led into a viewing party in the John F. Kennedy Jr. Forum. If there was any consensus in the bipartisan group, it was that intense training is necessary, even if that doesn’t always show on TV.

“We want to create a moment that the press will pay attention to,” O’Donnell said. “That sometimes undercuts the substantive side of debate prep.”

O’Donnell recalled a moment in 2008 when Republican nominee John McCain, exhausted by repeatedly trying to answer a question on gay marriage in a mock debate with O’Donnell, finally gave up. “O’Donnell has done what the North Vietnamese could not,” another adviser quipped.

“I’m willing to have a candidate like me less if, when they go out on stage, they are totally prepared and confident in their abilities,” O’Donnell said.

Moderating requires a completely different kind of preparation, said Carole Simpson, former anchor of “World News Tonight,” who was the first woman and first African-American to moderate a presidential debate, in 1992.

“It’s 90 minutes, and there’s no break,” she said of the debate format. “The train has left the station.”

Although most political scientists say debate performance has little overall effect on how people vote, Simpson said, many experts have said her debate ended up costing George H.W. Bush his re-election in 1992 — unbeknownst to her in the moment.

“I didn’t know he looked at his watch three times,” she said, recalling Bush’s gesture of impatience that left some voters cold.

“Until I saw the tape the next day, I didn’t appreciate how well [Bill] Clinton had done during the debate, and how poorly it looked that George Bush had done,” she said.

After Wednesday’s debate, most analysts said that Romney’s energetic performance and Obama’s soft-spoken demeanor had clearly boosted the challenger.

The most important thing a debate strategist can do is to instill confidence in the candidate, said Mark McKinnon, an IOP fellow and former chief media adviser to President George W. Bush.

In 2008, McKinnon received a call from the McCain campaign to help Republican vice presidential candidate Sarah Palin prepare for her debate with Joe Biden.

“It was an absolute train wreck,” he recalled. “Everybody knew it, including and especially Sarah Palin.”

“They get fixated on what they don’t know,” said McKinnon, who was ultimately successful in preparing his charge for prime time. “The problem with that is that it’s inexhaustible. It’s infinite. You have to somehow get in their heads and say: Stop. … Accept what you know, don’t fear what you don’t know, but really focus on the things that you do know.”

Candidates need to develop a mix of message and style, to demonstrate their presidential ability, and, if they’re lucky, “to have a moment or two that can live on in sound bites,” said Tad Devine, a Democratic strategist and former IOP fellow.

The problem, he admitted, is that sound bites are unpredictable. He would know: Devine coached Lloyd Bentsen, Michael Dukakis’ vice presidential running mate on the Democratic ticket in 1988, who famously dismissed his young GOP rival, Dan Quayle, with the damning judgment, “Senator, you’re no Jack Kennedy.”

“That was the end of it,” Devine said.

After the discussion, a packed crowd of political junkies lingered to watch the debate. although the mood resembled that of a big-budget movie premiere — popcorn included — the attendees acknowledged there was more at stake.

“I think a lot of the rhetoric that goes on prior to the debate goes unchallenged,” said Jamaal Glenn, a first-year student at HKS. “To me, the campaign really starts tonight.”