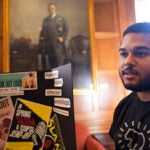 In the fall of 1833, an English nobleman and novelist by the name of Edward Bulwer-Lytton passed through Milan — part of a journey to both regain his health and escape a hectoring wife. (Yes, that Bulwer-Lytton, who wrote the most famous opening line in literature: “It was a dark and stormy night. …”)

He visited the Brera Gallery, and was unimpressed by the paintings — except one: a depiction of crowds fleeing Pompeii, the doomed city that in A.D. 79 was buried in ash from an erupting Mount Vesuvius.

“The picture is full of genius, imagination, and nature,” Bulwer-Lytton wrote later. “The faces are fine, the conception grand.” That winter, he was inspired again by studying the city itself, unearthed nearly 100 years before but just being fully excavated. The result was “The Last Days of Pompeii” (1834), which became the most popular historical novel of the 19th century. Its opening line — “Ho, Diomed, well met!” — promised another dark and stormy night for readers. But instead, Bulwer-Lytton inspired imagery so durable that it lives today.

A pair of Harvard events last week looked at the artistic legacy of Pompeii — a kind of “Apocalypse Then.”

In “Images of a Doomed City” on Sept. 20, archaeologist Adrian Staehli traced portrayals of the disaster, from 19th-century painting through early-20th-century cinema. (The occasion was the M. Victor Leventritt Lecture of the Harvard Art Museums.) It was the Pompeii disaster, Staehli said, that first inspired many of the visual templates of the ancient world we still use today.

On Sept. 23, the Harvard Film Archive sponsored a screening of “Gli ultimi giorni di Pompei” (“The Last Days of Pompeii”) an extravagantly produced 1926 Italian silent that was intended to revive Italy’s flagging film industry. It failed to do that, said Staehli, who is Harvard’s Loeb Professor of Classical Archaeology. But the film does illustrate the durability of imagery rooted in 19th-century paintings and in Bulwer-Lytton’s admiring obsession with the grand architecture, sumptuous interiors, and fleshy pleasures of ancient Roman culture.

People to the front

It is this same cast of characters who set aside differences to take center stage in the 19th-century paintings. Panic and destruction create a democracy of fear. One “landmark history painting” stands out, said Staehli to his audience at the Arthur M. Sackler Museum: “The Last Day of Pompeii” (1827-1833), by Karl Brullov — the same painting to inspire Bulwer-Lytton. It was monumental in scale — 18 feet by nearly 15 feet. And its design was monumentally radical. Nature and the volcano — the centerpieces of 18th-century depictions — became mere backdrops. People, in vignettes of panic, were what mattered: a soldier rescuing his father, a dead woman and her baby, a fleeing family — “even Brullov himself,” in a self-portrait, said Staehli, escaping with his painting supplies.

Brullov’s painting broke the traditional boundaries of representation by putting people at the forefront. Earlier depictions of Pompeii, like Joseph Rebell’s “Eruption of Vesuvius at Night” (1822), played into the “aesthetics of the sublime,” said Staehli, and “the delightful horror of nature” that shrank humans to dots, or left them out altogether.

Brullov’s view of Pompeii reflected another radical idea: that there could be disasters “without theocracy or heroes,” said Staehli — that in catastrophic moments humankind was on its own, without benefit of God or moral exemplars. “There is only fear, avarice, greed, and struggle to survive,” he added — “no meaning or allegory here, just history.”

“Just history” was behind many later depictions of Pompeii — paintings and engravings that laid out in anthropological detail the marketplaces, streets, interiors, and placid tepidaria (bathhouses) of the city before its fall. It’s another echo of Bulwer-Lytton, a novelist more interested in Pompeii than the disaster that wiped it out. (The volcano does not rumble until page 333 of his 356-page book.)

But art brought the disaster back, too, chiefly in the form of what Staehli called “toga dramas” or “pyrodramas” — traveling outdoor shows that featured hundreds of extras, tableaux vivant, and spectacular fireworks in place of volcanic flames and ash. James Pain’s “Last Days of Pompeii” toured the world, and played regularly at Coney Island from 1879 to 1914.

Spectacle productions paved the way for the disaster to make its way to cinema, said Staehli, beginning with a 1908 film version of the fall of Pompeii and two in 1913 — both Italian. All were big at the box office.

So when the Italian film industry was struggling to compete with American products in the 1920s — including “Ben-Hur” (1925) — it was reasonable to think that another version of “The Last Days of Pompeii” would do the trick. “Gli ultimi giorni di Pompei” — based on the Bulwer-Lytton story — went all out: 4,240 takes, hundreds of extras, and lavish sets depicting realistic interiors, façades, costumes, and street scenes, all based on archaeological evidence and 19th-century paintings. The final film was more than three hours long.

“The movie is further enhanced with many nude bathing scenes,” Staehli told the Harvard Film Archive audience. (He is an expert in depictions of nudity and the body in ancient Greek and Roman art.)

Despite men and women peeling off togas and leaping into tepidaria, success eluded the film, which was compressed to just over two hours in the print seen at Harvard. (Borrowed from the British Film Institute, it is one of only three in the world.)

An American attempt to freshen the story fared no better. “The Last Days of Pompeii” appeared in 1935, directed by the same duo — Merian C. Cooper and Ernest B. Schoedsack — who had made “King Kong” two years earlier. Despite those impressive credentials, said Staehli, the film was “a spectacular disaster.”