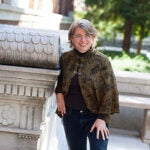 The tale of Benny and Jenny

Though it looked like a science fair on the outside, what with all the poster boards on display, Wednesday’s Literary Homecoming was a success, drawing delegates from the campus’s literary scene and students looking to find their lit niches, and get a foot in the door, too.

Sponsored by the Woodberry Poetry Room, the Literary Homecoming gathered inside the Barker Center representatives from the English Department, the Harvard Review, the Harvard Advocate, Speak Out Loud, and Tuesday magazine, among others.

English concentrator Amy Robinson ’15 was stationed at a table for Tuesday magazine. Robinson, who writes fiction and nonfiction, learned of the publication at last fall’s activities fair, and now she’s co-president. “Tuesday is such a great magazine, and it’s new and it’s small, so anyone getting involved can have a big influence,” she said.

Nearby, Bryan Erickson ’15 and Cassandra Euphrat Weston ’14 manned a spot for Speak Out Loud, Harvard’s spoken word poetry organization. “This group was created out of a need and a desire for a space for spoken word to exist, and for collaboration,” said Erickson. The group sponsors open mic nights in Ticknor Lounge and hosts workshops.

“We’re not just creating a community of poetry, but poetry that’s often very personal. That kind of vulnerability is important on an analytical campus,” said Euphrat Weston.

Freshmen roommates Yinka Ogunbiyi ’16 and Julia Haney ’16 mingled among the crowd. “I came to find out what’s available for people interested in writing and being exposed to what’s going on at Harvard in publishing and editing,” said Ogunbiyi, a London native who likes writing short stories and poems. “An internship at the Harvard Review sounds interesting.”

“We’re just trying to understand what this place has to offer,” added Haney. “And it’s nice that it’s all consolidated.”

Crouched in a corner, Harvard Law School student Joel Knopf picked through stacks of free literary magazines. Knopf said he is at work on the second draft of a young adult novel and came to the event to find opportunities to work creatively at Harvard.

Arts @ 29 Garden program manager Bess Paupeck spun records on a turntable. The records were pressed with mash-ups of student responses to Woodberry Poetry Room recordings, and were made during a Winter Session creative writing workshop. “This January, we’re doing an arts journalism and criticism workshop with the Nieman Fellows,” Paupeck said.

Amy Hempel, the Briggs-Copeland lecturer in fiction, chatted with students and said that when it came to literature at Harvard “people are really open for business. No one is refusing possibilities.”

Echoing that sentiment was Woodberry Poetry Room Director Christina Davis, who congratulated everyone in attendance for being a part of “the flourishing of the arts and a reinvention of pre-existing publications and presses and a start-up energy fueling new indie organizations.”

“The reason the Department of English and everyone facilitated this event for the first time ever is because of how seriously Harvard takes creative writing, arguably as seriously as it takes the sciences,” said Bret Anthony Johnston, director of creative writing in the English Department. “It’s because of the work you’re doing, and the caliber of that work. … And it’s what you continue to do once you leave here and publish, and produce your plays, and your screenplays are made into movies. You’re giving Harvard the obligation to take writing seriously, and for that I thank you.”