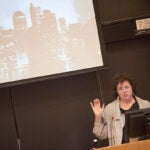 Scholar cites deaths, sees regime slipping, yet wonders: Where is the world?

The numbers tell a story of desperation.

A recent United Nations report said that more than 100,000 refugees fled the violence in Syria in August, the most of any month since hostilities began early last year between Bashar Assad’s government and rebel forces. Some estimates put last month’s death toll at 5,000. Both sides have been accused of war crimes in a conflict that has taken more than 20,000 lives, including many civilians.

As outside officials struggle to find a way to stop the violence, one scholar offered his perspective on the conflict during a discussion last Thursday sponsored by Harvard University, the Weatherhead Center for International Affairs, and the Center for Middle Eastern Studies.

Repeating a refrain from recent weeks, Murhaf Jouejati, a professor of Middle East studies at the National Defense University and a member of the Syrian National Council, a coalition of exiled opposition groups based in Turkey, called the situation in Syria a “catastrophe of huge proportions” and one of “unprecedented brutality.”

A Syrian native and a specialist on Middle East affairs, Jouejati described the chaos on the ground, including, he said, the government’s recent use of airstrikes against civilians. “Imagine you go to a bakery in the morning hoping to buy a loaf of bread, and you are attacked by an F-14.”

Still, although some analysts believe that Assad’s well-armed troops will be difficult to defeat, Jouejati insisted that the regime is close to collapse. He cited as evidence of the government’s slippage: approximately 80,000 members of the opposition forces, largely composed of former Syrian soldiers who refused to fire on civilians; the high-ranking military officials who have defected from the regime to the rebels; and the nation’s skyrocketing inflation and unemployment rates.

According to Jouejati, the greatest blow to the government came in July when a blast killed four of Assad’s top security chiefs. That attack, he said, had “a debilitating effect on the regime.”

But when it came to offering the crowd that jammed a meeting room in Harvard’s Knafel Building a solution to the crisis, Jouejati was less clear. Answering his own question, “Where do we go from here?” he responded with, “Only Allah knows.”

He imagined two polar extremes, but acknowledged that anything in between could happen. He said the best-case scenario would mean the collapse of the Assad regime, the emergence of a transitional government, and ultimately a civil and democratic state. The worst-case scenario, he said, would find the country shattered along ethnic and sectarian lines.

That mindset, Jouejati said, has led to a lack of political will on either side, with Assad refusing to compromise, and the rebels refusing to negotiate with a leader who has “blood on his hands.”

Jouejati insisted that some leaders in the Syrian regime are “good apples,” and that those uninvolved in the violence could negotiate with the rebels and play an important part in a transitional government. He also called for a no-fly zone and a protected area for refugees, created with the help of an international coalition.

“I think there could be the emergence of a concert of nations in which there was a distribution of tasks, in which every country is comfortable with its own task,” said Jouejati, adding that many in the Syrian opposition want better weapons, not massive military interventions.

Jouejati added that simply the threat of the use of force from the United States and other countries could help deter Assad. He recalled the words of U.S. Sen. John McCain, who in March threatened to use American “airpower” to stop the regime’s attacks.

“The same day,” said Jouejati, “four military generals defected. The same day the Syrian pound went from 50 to the dollar to 73 to the dollar. That is because Sen. McCain used the threat of the use of force, and that threat was enough.”

He also condemned China, Iran, and Russia for sending military aid to support Assad. “The government of Russia is a partner in mass murder, and let history show that,” Jouejati said.

Above all, he called for “human decency.”