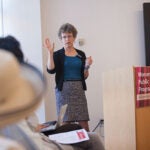 In an address Wednesday evening at the Harvard Kennedy School (HKS), journalist Rami Khouri presented an overview of the “bewildering and exhilarating changes” that have swept the Middle East since the Arab Spring more than a year ago.

In his wide-ranging talk, “The Arab Spring: From Citizen Revolts to National Reconfigurations,” Khouri expressed optimism tempered with a few caveats, telling the packed audience that “what we’re seeing now is an unprecedented and historic process of self-determination” in the region.

Steve Walt, Robert and Renee Belfer Professor of International Affairs, moderated the event, which was part of the Middle East Initiative Speaker Series at the Belfer Center for Science and International Affairs, and introduced Khouri. “A lot has been going on in the region recently,” Walt began, indirectly referencing the attacks on U.S. embassies and diplomats in Egypt and Libya last week. Speaking more generally about the Arab Spring, Walt said, “We are now witnessing upheavals in the region that some have welcomed and others have feared.”

Khouri’s connections with the region are manifold. A senior fellow at the Middle East Initiative, he is also editor-at-large of the Beruit-based Daily Star, where he writes often about regional events. Khouri admitted, “It’s difficult to come up with one analysis that captures the variety and depth of what’s going on” in the region, but he detailed a number of critical factors. He began by noting that “governments are now more accountable” to their people and to emerging systems of checks and balances.

“Constitutional councils and judges are creating robust checks and balances, and so is the media,” said Khouri.

“A whole range of new actors is emerging,” Khouri continued, including revolutionary youth, labor unions, tribal groups, the Muslim Brotherhood, the armed forces, bands of thugs, the court system, secular and nationalist parties, and individual citizens. “The most exciting process under way is the creation of new constitutions, as these new actors are forced to negotiate new relationships to share power while reflecting national values and principles.”

Khouri highlighted the difficulties in balancing so many divergent interests in such a condensed time frame.

Constitution building is messy, necessary work, Khouri said, requiring a “new balancing between military and civilian authorities, between religiosity and secularism.” Khouri cited Tunisia, which is currently debating “whether Islam is the only source of law or just one source of law” among others. Delicate political and social issues that took hundreds of years to emerge in Europe or the United States (like the role of women or church-state relations) are now being passionately debated in countries such as Egypt and Tunisia.

“Everyone in the region wants a civil state, but nobody knows exactly what that means,” Khouri said. “Will Islamists, for example, make decisions based on scripture or on the will of the people? Does law come from God or from the people?”

There are challenges ahead. Khouri raised the issue of the legitimacy of Arab borders, some of which were defined during the colonial period. “Do these states make sense to their own people? They’ve never been fully ratified by their peoples,” who may wish for separation or decentralization, noted Khouri. An ever-present potentially destabilizing factor is the Arab-Israeli conflict, which also feeds into anti-American feelings in the region.

After his presentation, Khouri invited questions from the audience. Asked how the United States should respond to the Syrian government’s brutal crackdown against its own people, Khouri answered that “the international community should help supply arms to the opposition groups, but not intervene directly.” It is “up to the Syrian people to decide their own fate.” Khouri described the present Syrian regime as “a Stalinist state,” and expressed optimism that “the Syrian people will take over and organize their own society” when the regime falls.

What people have been witnessing recently in the Middle East, Khouri summarized, is “a process of revolt, overthrow, and now reconfiguration of the systems of power.” It’s messy, but, he said, if the process goes well, “ordinary citizens can, for the first time, feel in control of their own countries” and destinies.