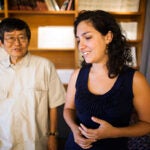 For years, doctors treating HIV have recognized a relationship between how faithfully patients take prescribed drugs and how likely the virus is to develop drug resistance. More recently, research has shown that the relationship between adherence to a drug regimen and resistance is different for each of the drugs that make up the “cocktail” used to control the disease.

New research by Harvard scientists could help explain why those differences exist, and may help doctors quickly and cheaply design drug combinations less likely to result in resistance.

A team led by Martin Nowak, professor of mathematics and of biology and director of the Program for Evolutionary Dynamics, has developed a technique for modeling the effects of various treatments and for predicting whether the treatments will cause the virus to develop resistance. The work is described in a paper in Nature Medicine.

“What we demonstrate in this paper is a prototype for predicting, through modeling, whether a patient at a given adherence level is likely to develop resistance to treatment,” said Alison Hill, a Ph.D. student in biophysics in the Graduate School of Arts and Sciences (GSAS) and co-first author of the paper. “Compared to the time and expense of a clinical trial, this method offers a relatively easy way to make these predictions. And, as we show in the paper, our results match with what doctors are seeing in clinical settings.”

The hope, said Nowak, is that the new technique will take some of the guesswork out of what is now largely a trial-and-error process.

“This is a mathematical tool that will help design clinical trials,” he said. “Right now, researchers are using trial and error to develop these combination therapies. Our approach uses the mathematical understanding of evolution to make the process more akin to engineering.”

Developing a model that can make such predictions required huge amounts of data.

Hill and Daniel Scholes Rosenbloom, a GSAS Ph.D. student in organismic and evolutionary biology and another co-first author, turned to the Johns Hopkins University School of Medicine, where Professor Robert F. Siliciano was working with Ph.D. student Alireza Rabi (also a co-first author) to study how the HIV virus reacted to varying drug dosages.

Their research proved critical to the model that Hill, Rabi, and Rosenbloom eventually designed, because the level of the drug in patients — even those who adhere to their treatment perfectly — varies. When drug levels are low — as they are between doses, or if a dose is missed — the virus is better able to replicate and grow. Higher drug levels, by contrast, may keep the virus in check, but they also increase the risk of mutant strains of the virus, leading to drug resistance.

Armed with the data from Johns Hopkins, Hill, Rabi, and Rosenbloom created a computer model that could predict whether and how much the virus, or a drug-resistant strain, was growing based on how strictly patients stuck to their drug regimen.

“Our model is essentially a simulation of what goes on during treatment,” Rosenbloom said. “We created a number of simulated patients, each of whom had different characteristics, and then we said, ‘Let’s imagine these patients have 60 percent adherence to their treatment — they take 60 percent of the pills they’re supposed to.’ Our model can tell us what their drug concentration is over time, and based on that, we can say whether the virus is growing or shrinking, and whether they’re likely to develop resistance.”

The predictions, Rosenbloom explained, can then serve as a guide to researchers as they work to design drug cocktails to combat HIV.

Hill and Rosenbloom said they plan to continue to refine the model.

“Over the past 10 years, the number of HIV-infected people receiving drug treatment has increased immensely,” Hill said. “Figuring out what the best ways are to treat people in terms of cost-effectiveness, adherence, and the chance of developing resistance is going to become even more important.”