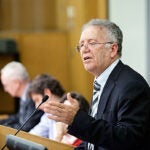 A warning from inside Tunisia

Call it the baby bust. Even as the world’s population surpasses 7 billion, some countries are facing significant population declines. Mary Brinton’s new research indicates that a complex clash between countries’ gender norms and changing economic realities could explain why, in many developed nations, fewer women are having children.

“In global terms, we could think, ‘Well, low fertility is a great thing for the maintenance of the planet,’” Brinton, Reischauer Institute Professor of Sociology and chair of the Sociology Department, told an audience at Harvard Kennedy School Sept. 13. “But for individual countries, it’s definitely … regarded as a problem that needs to be addressed.”

The presentation, sponsored by the Women and Public Policy Program’s weekly lunchtime seminar series, highlighted research from a working paper by Brinton and Dong Ju Lee, a graduate student in sociology at Harvard. The work is part of the Project on Gender Equity and Low Fertility, a year-old initiative funded by the National Science Foundation that Brinton is running, along with collaborators in Spain, Japan, and Sweden.

Many countries in Southern Europe and East Asia now have a birthrate — the number of children born to each woman, on average — below 1.5, a ratio well below what is needed to ensure steady population replacement from one generation to the next. (Most experts put that figure at 2.1, to account for some infant mortality.)

The implications of a rapidly aging population — growing health care costs, increasing burdens on the younger, working-age population — are enough to keep “policymakers in East Asia and Southern Europe awake at night,” Brinton said. And while an influx of immigrants can help to keep populations from shrinking, some researchers and policymakers are turning their attention to finding other ways to boost birthrates.

Demographers call the phenomenon “lowest-low fertility,” and over the past two decades more and more postindustrial countries have found themselves facing it. The puzzle for Brinton and other researchers lies in the fact that traditionally family-oriented societies, such as Italy and Japan, aren’t immune to the problem — in fact, they appear to be slightly more prone to low birthrates than their more progressive neighbors.

To learn why that might be, Brinton and Lee studied existing survey data provided by the Organization for Economic Cooperation and Development from 24 postindustrial countries that gauged men’s and women’s attitudes toward gender roles in the home and the workplace. In countries with more conservative respondents (those who viewed men as breadwinners and women as primary caregivers), Brinton and Lee found, birthrates were lower.

However, countries whose citizens tended to hold strictly egalitarian views — who believed that all men and women should work outside the home, for instance, or that being a housewife is not a fulfilling role — also had lower birthrates.

Societies that tend to have steady birthrates appear to be those with flexible attitudes toward women’s roles in the home and the workplace, which “allows people to do family in various ways,” Brinton said. The United States and Great Britain both fall into that category, according to the data.

That flexibility is increasingly important in today’s economy, Brinton said. In countries where women cannot easily exit and reenter the workforce, having children may seem like an untenable burden for a woman who values her career.

As many postindustrial societies face economic slumps, the pressure on men in conservative-minded, “male breadwinner” countries is compounded. Young men wait to start families until they can provide for them, which in countries such as Japan and Italy has resulted in delaying the average age of marriage and thus of childbirth for both men and women.

“We don’t think it’s all about the economy,” Brinton said. “We think there’s this mixed explanation that’s based on the dominant norms of a society about men’s and women’s roles, labor market structure, and the [country’s] economic conditions.”

For the next stage of the project, Brinton and her graduate students will look at how the attitudes measured in the gender surveys have changed over time. They’re also conducting in-depth interviews with young women and men in the countries they’ve surveyed, to try to capture more nuanced attitudes on questions of gender roles in the home and the workplace — and how those might be tied to their views on having children.