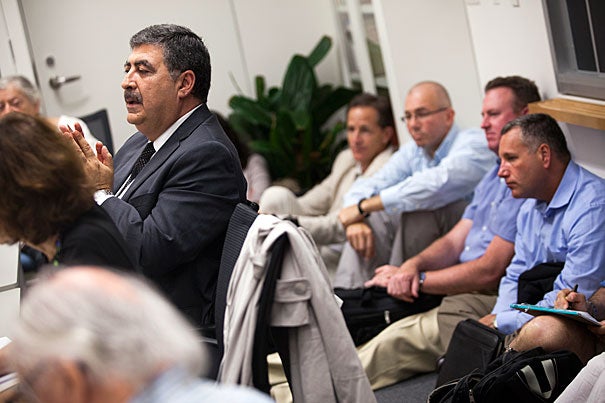 There was once a time when the business of running elections concerned none but bureaucrats and volunteers, and sparked the interest of few but civics teachers and politics junkies. Now, thanks to a new wave of controversial voter identification laws in the buildup to the 2012 election, the topic filled the room at the John F. Kennedy Jr. Forum at Harvard Kennedy School (HKS) on Thursday.

“Back in the 2000 election, we wouldn’t be having this kind of discussion,” Trey Grayson, director of the Institute of Politics, told the crowd. “Then, we all know what happened.”

The hotly contested 2000 presidential election — in which, in Florida, every vote truly did matter because the race was so tight — sparked a renewed interest in election administration and a flood of election laws in the states. Though the number of laws being passed has not increased significantly in the past two years, they have become increasingly politicized in the lead-up to the presidential election, said Jennie Bowser, a senior fellow at the bipartisan National Conference of State Legislatures, who tracks election laws around the country.

And no election laws are more controversial, or more divided along partisan lines, than voter identification laws, a topic Bowser and others debated in “Protecting the Vote: Suppression, Fraud, and the Future of Voter ID Laws.”

In 2000, 14 states had voter identification laws; none of them were “strict” laws, which stipulate that ballots from voters without IDs are not counted unless the voters return within three days of the election to show proper identification. This year, 33 states have ID laws, nine of which are strict (though, Bowser added, many of those are currently tied up in court and could be overturned).

While preventing voter fraud is a worthy goal, the recent slate of laws does little to address the problem, said Tova Wang, a fellow at Demos and The Century Foundation and author of “The Politics of Voter Suppression: Defending and Expanding Americans’ Right to Vote.”

“Voter impersonation fraud, which is the only type of fraud that would be addressed by a voter identification law, is virtually nonexistent,” Wang said, citing a recent study that found only 10 documented cases of such fraud nationwide since 2000.

Any positive effect is vastly outweighed by the laws’ negative effect on voter turnout among populations that are less likely to hold government-issued photo IDs, such as driver’s licenses or passports.

“They’re requiring types of ID that certain populations just don’t have and would be extremely difficult for them to get …, if not impossible, and it’s particularly among the poor and the elderly,” she said. Other countries have adopted national voter identification programs, she added, but those governments have also backed large-scale efforts to make sure every citizen received a proper ID.

Voter impersonation may not be a widespread problem, but that “doesn’t mean we can’t take steps to prevent a problem that is so hard to detect,” said John Fund, senior editor of The American Spectator and author of “Who’s Counting? How Fraudsters and Bureaucrats Put Your Vote at Risk.”

There are more than 160 counties in the United States where there are more registered voters than there are adults over 18, he said. The Pew Research Center has found there are roughly 2 million deceased voters still on the registration rolls. (“I do not believe in representation without respiration,” he joked.) Just as important as ensuring Americans’ right to vote is assuring that such nonexistent voters aren’t given a ballot, he said.

“We spend a lot of time in this country making sure we don’t have counterfeit currency,” Fund said. “The currency of democracy is our votes.”

Regardless of their merits or flaws, it’s important to analyze new voter ID laws in the context of American history, said Alex Keyssar, Matthew W. Stirling Jr. Professor of History and Social Policy at HKS.

If America were an “ideal democracy” with extremely high voter turnout and a history of encouraging all citizens to vote, identification laws might be seen as a reasonable development. But in a system where, “for most of its history, the country was profoundly discriminatory, where it erected one barrier after another to the participation of people of color and poor people, and kept changing the law in a variety of ways to achieve that objective over a period of nearly 200 years,” voters are naturally distrustful, Keyssar said.

“The simple fact that the Republicans made huge gains in 2010 explains a lot of why so many states have enacted [laws] in 2011 and 2012,” said Bowser, explaining the partisan tenor of the debate over voter identification. “This is something that has been on the Republican agenda for a long time.” There are more Republican-controlled state legislatures now than at any time since the 1930s, she added.

Despite the heated debate, the speakers agreed on some points. Fraud can and does occur, they said, particularly in absentee voting. Many counties’ voter registration rolls are poorly managed and could be cleaned up to eliminate the names of voters who have died or moved, they said. The speakers also agreed that many states’ early voting periods begin unreasonably far in advance — in some states, as early as two months before Election Day — and could be shortened to ensure better oversight.

Still, Wang insisted, discussions of how to make America’s voting process simpler, more sensible, and less vulnerable to fraud should bear in mind that voting is not a privilege, but a right.

“You hear a lot of people this year talking about [voting] as a privilege,” she said. “They’re making it so that voting is only the domain of the worthy, or you have to earn it in some way.”