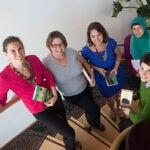 Journalist and historian Diane McWhorter decided to re-issue her prize-winning book, “Carry Me Home: Birmingham, Alabama, The Climactic Battle of the Civil Rights Revolution,” after she discovered new materials on the subject, and after she visited the Buchenwald concentration camp with her two children.

In a presentation on Wednesday as part of the Colloquium Series of the W.E.B. Du Bois Institute, where McWhorter is a Caperton Fellow, she recounted her moving visit to the notorious death camp. She was particularly affected by photographs of civilians from the neighboring town of Weimar, who were bused to the camp after the war to be confronted with the atrocities.

In observing the denial and willful amnesia of some of these residents, McWhorter said she was forced to look at her own attitudes growing up in a prominent family in a segregated Birmingham.

“Carry Me Home” was first published in 2001, chronicling the attempts at Civil Rights reform and their violent repression in Birmingham in 1963. These efforts and the clashes that followed led President John Kennedy to intercede and were a crucial step in the demise of segregation in the American South. McWhorter characterizes this episode of American history as “the Gettysburg of the second American Revolution.” Her book received the Pulitzer Prize for general nonfiction, as well as the J. Anthony Lukas Book Prize from Harvard’s Nieman Foundation and the Columbia University School of Journalism.

Coming of age in Birmingham in the 1960s, McWhorter described her own received attitudes toward race and toward the rioting and violence in her hometown. In her criticism of her own attitudes, and those of her family, she described her suspicions of her own father’s evening disappearances to attend “Civil Rights” meetings. She now suspects that these meetings were for organizing Ku Klux Klan and other vigilante resistance to integration. In her self-described country club milieu, she was inadvertently in the center of collusion among the city’s elites, including the government, industry, and law enforcement, to sabotage the integration movement, attack Civil Rights leader Martin Luther King Jr. and other leading black clergymen, and harass aid groups such as the Freedom Riders.

In a new afterword for the re-issue of “Carry Me Home,” she will discuss new materials that indicate that the collusion between powerful political interests and industry was even deeper and more pervasive than initially portrayed in the book, and included the Federal Bureau of Investigation as well as the media.

McWhorter’s fresh perspective is also deepened by her experience visiting Buchenwald and research conducted on a Holtzbrinck fellowship at the American Academy in Berlin in 2007.

McWhorter’s work-in-progress as a fellow at the Du Bois Institute is on rocket inventor Werner von Braun. The German Von Braun, who had used Nazi slave labor to build the first V-1 and V-2 rockets to bomb Britain during World War II, was whisked away from the advancing Russian army at war’s end to land in Huntsville, Ala. There he pioneered American rocket technology and became the father of the Apollo/Saturn Space Program that put an American on the moon.

McWhorter said the American South, and Alabama in particular, in 1945 was a receptive environment for the scientist’s views on race. The working title for her next book is “Moon of Alabama: From Nazi Germany to Tranquility Base, via the Segregated American South.”

McWhorter also worked on this project as a Mildred Londas Weisman Fellow at the Radcliffe Institute for Advanced Study last year.

Upcoming at the W.E.B. Du Bois Institute is the Nathan I. Huggins Lecture Series, which will feature George Reid Andrews Oct. 2-4 at 4 p.m. Titled “Envisioning Afro-Latin America,” the three-part series will be held in the Thompson Room at the Barker Center, 12 Quincy St., Cambridge. The event is co-sponsored by the Department of African and African American Studies and Harvard University Press.