An app aimed at transparency 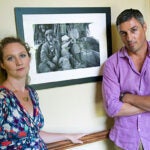 When political ads begin to flood television sets across America, many viewers reach for the remote. One recent Harvard Kennedy School (HKS) grad hopes they’ll start grabbing their phones, driven not by annoyance or boredom, but curiosity.

Super PAC App, the brainchild of Jennifer Hollett, M.C./M.P.A. ’12, and her MIT classmate Dan Siegel, gives voters information about the big money behind presidential campaign ads with just a single touch on an iPhone. By recording a snippet of audio from a television ad as it plays, a user can see who paid for the ad, how much money that political group has raised and spent so far, and how truthful the claims in the ad are (via links to outside, nonpartisan news sources).

“We want to educate and engage the average voter,” Hollett said. “We hope it’ll make people, instead of shutting off the TV, figure out what’s going on.”

Television and, to a lesser extent, radio advertising have long dominated crunch-time presidential campaign spending, as both sides make last-minute pitches to voters. But Hollett and Siegel thought this election season’s influx of private money into the campaigns called for a new tool of transparency.

Super PACs are a controversial addition to the presidential race, created by two Supreme Court decisions in 2010 that affirmed political action committees’ right to raise and spend unlimited funds for campaigning, as long as those outside groups do not consort with a candidate’s official campaign. According to data compiled by the Center for Responsive Politics, super PACs have raised $349 million in 2012 and have spent $219 million — a figure that rivals the $263 million spent by President Obama and well surpasses the $163 million spent by Mitt Romney thus far in their campaigns.

As Hollett points out, super PACs often have vague-sounding names — Priorities USA Action, Restore Our Future — and even vaguer motives, as they are not required to disclose as much information about their donors to the Federal Election Commission as presidential candidates are.

“It’s hard to determine a super PAC ad from any other political ad,” Hollett said. “They look and feel and sound the same — which is why we hope our app provides some clarity for people.”

Created with the help of technology company TuneSat and funded by a grant from the Knight Foundation, the not-for-profit app relies on audio fingerprinting technology already at use in other popular apps like Shazam, which lets listeners hunt down the name and performer of a song they’re hearing on the fly — in the car or at a coffee shop, for example. Users can also rate ads as “Fair,” “Fishy,” “Love,” or “Fail,” a feature that Hollett and Siegel hope will engage users.

The explosion of mobile technology and smartphone use is one of the “overarching storylines” of this election season, said Trey Grayson, director of the Institute of Politics and an adviser to Glassy Media, Hollett and Siegel’s mobile app startup.

“It’s how people are getting their information,” Grayson said. “They’re not sitting at or going to a computer to look things up. The campaigns are recognizing that.”

Still, for all the Internet’s disruptive power, television remains king, said Nicco Mele, an adjunct lecturer in public policy at HKS and another adviser to Hollett and Siegel.

“Campaigns are still won and lost in 30- and 60-second television spots,” said Mele, who ran Gov. Howard Dean’s pioneering Web operation during his 2004 bid for the Democratic nomination. “It’s no accident that in 2008, Obama raised almost half a billion dollars on the Internet and spent almost all of it on television.”

Now that more and more voters are “screensharing” — watching television while also using a smartphone or other Internet-enabled device — third-party apps have emerged as a potential solution to the voter information gap.

“In the days before the Internet, if a television ad ran and you wanted to find out more about it, that was pretty hard,” Mele said. “Deciphering who was paying for it was a little bit of a black box. The work that Jennifer and Dan have done is an attempt to bring some transparency by using digital technology to connect a bunch of dots that would be much harder to connect manually.”

Hollett and Siegel aren’t alone in the quest to shed light on campaign ads with the power of a smartphone. The nonprofit Sunlight Foundation has created a similar app, though Super PAC App’s interface is somewhat simpler and more colorful.

Hollett met Siegel, who graduated from MIT’s Sloan School of Management in June, in a course she took at MIT’s Media Lab on the growing field of “social television”; the idea grew out of an assignment for the class. Since graduation, the two have been working “around the clock” to keep up with the ever-growing roster of ads, both positive and negative, that have saturated media markets across the country.

“Dan and I are cataloging the commercials. We’ve watched a lot of ads, but that’s part of the fun,” Hollett said.

At each party’s convention, this week and last, the pair have spread the word about the app, hoping to attract more users. For Hollett, a native Canadian who worked in digital development (including on the singer Celine Dion’s website) and broadcast news for more than a decade, a midcareer swerve to the Kennedy School — and then to the tech startup world — was a welcome change.

Catching the entrepreneurial bug “wasn’t my plan,” she said. “It kind of just happened. But I couldn’t have asked for more at graduation. This has been a great partnership between Harvard and MIT.”

And she doesn’t plan to give up the Super PAC App project any time soon. “There’s always an election somewhere,” she said.