A firm voice on Europe 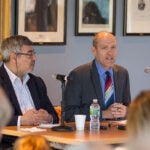 Jan Fischer, former prime minister of the Czech Republic and the leading candidate in the country’s presidential campaign, in a Harvard talk on Thursday blamed the European financial crisis on nations thinking prosperity “may be bought on credit,” and said that Europe shouldn’t rush into closer financial and political ties in the search for a solution.

“I perceive the current loud cheering for a European federation [to be]… an expression of helplessness,” he said.

Were European nations to move toward union, such a plan would require full deliberation, Fischer said. He cited the diversity that still exists among nations — in areas such as national spending and welfare and pension systems — and strong national identity as evidence that Europeans aren’t ready to surrender national sovereignty to a stronger central government.

Fischer made his comments during a talk at Harvard’s Minda de Gunzburg Center for European Studies (CES). The talk, “The Euro Crisis and Its Impact on Central and Eastern EU Nations,” was chaired by CES Director Grzegorz Ekiert, a professor of government at Harvard.

The idea of Europe moving closer to becoming a federation — where individual member states are under the umbrella of a central European government — has developed in response to the sovereign debt crisis. Fischer traced the crisis to irresponsible governments letting spending and debts get out of control.

“The future cannot be bought on credit,” Fischer said. “It’s apparent that the euro crisis, which forces more responsible states with healthier economies to bail out the less responsible, unhealthy ones, leads to the situation where national interests are defended even in countries with strong federalization support, such as Germany.”

Some leaders have suggested creating a stronger European fiscal union as a way out of the crisis. In such a scenario, spending policies would be more closely aligned and, should a member nation’s policies fall too far out of balance, a central European authority would step in to raise taxes or cut budgets.

The step would be aimed at avoiding a repeat of the current crisis, where some nations borrowed excessively to finance national budgets while others exercised fiscal restraint. The fiscally healthy nations, tied to the unhealthy by a common currency, the euro, have had little choice but to bail those countries out.

The Czech Republic, one of the 27 European Union nations, has been shielded a bit from the crisis. That’s because it is one of the 10 member nations that retained its national currency instead of adopting the euro. Although the country has been mired in recession, its banking system remains healthy, Fischer said.

That the EU and the eurozone — those nations that use the euro — are stuck between the continent’s past as a collection of separate nation-states and a possible future as a full federation is behind much of the difficulty in dealing with the debt crisis, he said.

Before engaging in discussions of greater European unification, the Czech Republic has to determine national goals and whether developing tighter ties with other nations is in the national interest, Fischer said. Stepping deeper into a European union, he said, should be a means to achieving citizens’ goals, not an end to itself.

Any tighter union would be a hard sell in the Czech Republic. Opinion polls show that the EU’s popularity has sunk below 50 percent, and that 90 percent of the populace oppose paying the debt of other countries, Fischer said.

In discussing the situation, Fischer pointed to the case of Slovakia, which, unlike the Czech Republic, adopted the euro and so is among the nations involved in bailing out ailing economies. He asked whether it is fair that the nation, about the same size as Greece, be asked to bail out a country in which pensions for the elderly are four times its own.

“Is it fair to expect Slovak seniors to subsidize their much better-off Greek counterparts using their modest income?” Fischer asked.

Fischer said the choice facing Europe has been cast as either moving toward a European federation or disintegration of the EU and the euro. It is not an “either/or” situation, he said, and middle-of-the-road proposals that allow nations some flexibility should be considered.

Despite his reservations, Fischer said that the EU has been a force for stability, particularly in the Balkans, where the memory of ethnic violence remains fresh.

“I can imagine only one thing worse than the existence of the European Union, and that is its nonexistence,” Fischer said. “Any crisis represents an opportunity, and it’s only up to us not to waste it.”