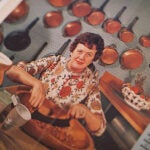 During a crowded reception at Harvard’s Arts @ 29 Garden, Travis K. Bost, M.Des.S. ’12, reached toward a small shelf of books and removed a green volume.

Choosing a book happens all the time at a University with more than 70 libraries, 17 million volumes, and miles of shelves. But it was also a larger act: Bost had designed the shelf, which was fitted with a microcontroller and photocells, to show information about the book being removed. When he picked out William Cronon’s “Nature’s Metropolis,” a computer screen flashed related information, including naming books by the same author.

Bost’s invention, which is still in the “proof of concept” stage, was on display at openLAB_Summer, an Aug. 9 showcase sponsored by metaLAB (at) Harvard, a Kirkland Street collaborative research laboratory under the umbrella of the Berkman Center for Internet & Society. Organizers called the dozen offerings on display “summer projects and propositions, experiments and explorations.”

The projects were different, and included “Paper Machines,” which turned a century of global land reform data into dramatic visualizations; a color-coded map representing a decade of library acquisitions at Harvard, part of metaLAB’s Library Observatory project; “Feral Copyright,” a project puzzling over digital-age issues of creativity and ownership; a map that plots global news reports from National Public Radio, revealing a geographic display of American news interests; and a Digital Archive of Japan’s 2011 Disasters.

And the projects were the same. All represented elements of metaLAB’s core mission of finding new ways to access, annotate, remix, display, and share information from what might be broadly called the humanities. Jeffrey Schnapp, metaLAB faculty director, calls this modern challenge “knowledge design.”

For centuries, the humanities have been the locus of pen, paper, print, and books. Schnapp, a Dante scholar, knows this traditional world very well, but is drawn to the new one as well. His core ethic for bringing the humanities into the digital age is a “print-plus” model of inquiry, as reported in the latest issue of Colloquy, the alumni magazine published by the Graduate School of Arts and Sciences.

Bost, an architect by training, acknowledged the durable power of print. He handed out explanatory cards at his own display of several projects, including “NPR News Geography” and “Augmented Shelf.” The future will not be one with “screens everywhere,” he said. “If you want to make people care about what’s happening here, don’t just have them click around. That will last two minutes.” Besides, Bost said, most prior technologies still have modern legacies. He added: “Are there technologies that ever really died?”

At the same time, are there any issues in the humanities that ever really died?  Author and cultural critic Matthew Battles, a senior researcher and principal at metaLAB, cited copyright as one issue that spans the ages. Martial, a Roman poet of the first century, wrote verse about plagiarism, Battles noted. “Authorship, sharing, and creating culture have always been a matter of negotiation,” he said, while standing amid the hubbub of openLAB.

Battles is behind metaLAB’s “feral copyright project,” which began with a roundtable workshop in July and is an attempt, he said, “to understand how copyright is lived” in the world of digital interchange.

He is also interested in another broad issue that the digital age has reprised from the past: how standards of content and conduct can be negotiated, especially in the era of an expanding polity of Wikipedia sensibilities. The past was prologue here too, he said. When Denis Diderot, a critic and writer of Enlightenment France, was editing the controversial Encyclopédie, said Battles, the publication — with its mission of inclusion and truthfulness — was considered “a renegade affair, an affront to authority.”

A whiff of the renegade hung pleasantly over the openLAB event, along with more than a little of the frugality required of many young Internet entrepreneurs. Ben Brady, M.Arch. ’12, a Graduate School of Design (GSD) Career Discovery instructor, had a turntable for creating 3-D images of artifacts, a valuable tool for scholars who may increasingly rely on digital representations of archived artifacts. A professional model costs $30,000. He built his for $30. Bost’s “Augmented Shelf” cost about the same to make, including photocells worth 75 cents each.

But the implications of such emerging technologies are far grander than these budgets suggest, especially when applied to harnessing scholarly insights from vast data sets, like library records or literary texts. In part, all that data hovering by the terabyte in the Internet may one day be efficiently mined by using visualization tools being developed at metaLAB and elsewhere.

Among the onlookers was William P. Stoneman, the Florence Fearrington Librarian of Houghton Library, who is also a scholar of medieval studies. He is increasingly a fan of visualizing large amounts of data as a way of gaining insights. He mentioned a recent project by Bost that transformed details from a Houghton search aid on 3,500 Edward Lear paintings into a “picture” of the holdings. “It offers exciting tools,” said Stoneman, “about how to approach larger topics.”

Visualizing data also opens the humanities to further collaborations among previously disparate disciplines, said Battles. “People with design sense can visualize it rapidly,” he said of metadata that is unanalyzed in the Internet. “It’s no longer the province of engineering.”