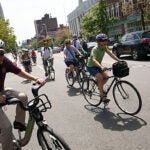 Harvard announced today that it will create a varsity women’s rugby team, to begin play in the 2013-14 season. The squad will be the 21st varsity sport for women and the 42nd in all, making Harvard the nation’s leader in both areas.