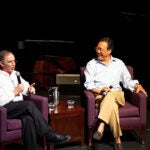 Inspiring as well as educating

Harvard experts on the past and future of humanitarian work

By Harvard School of Public Health

Better training, closer coordination among relief agencies, and a bigger dose of humility while working in unfamiliar cultures would help humanitarian aid workers, and make more of the billions of dollars spent each year on assistance, according to Harvard specialists with experience in the field.

Harvard Public Health editor Madeline Drexler spoke with Jennifer Leaning, François-Xavier Bagnoud Professor of the Practice of Health and Human Rights, a 30-year veteran in the field and a leading writer and scholar; Harvard Humanitarian Initiative (HHI) director Michael VanRooyen, who has launched relief efforts in more than 30 countries struck by war and disaster; and Parveen Parmar, associate director of the Brigham and Women’s Hospital International Emergency Medicine Fellowship and an associate faculty member at HHI, who set out on her first humanitarian mission in 2010.

Q: Why doesn’t humanitarian aid money trickle down to the people most in need?

VanRooyen: When the NGO machine steps into a large-scale humanitarian emergency, it quickly provides water and sanitation services, food aid, health care, housing, and security. Most organizations don’t effectively prepare for long-term sustainability — they don’t build water delivery systems for the city, they don’t build housing that will last, they don’t build infrastructure for program delivery. In many ways, the NGO community creates an alternate economy, and much of the money is spent on the delivery of emergency services. So it’s a valid complaint from local residents: “Where did all the money go? We don’t have pipes, we don’t have ditches, we don’t have farmland, we don’t have tools.”

On the other hand, it is difficult to deliver resources directly to affected individuals and families. And money delivered to a nonfunctional or nonexistent government rarely gets to the people in need. Those who argue that the humanitarian field needs to get more cash to recipients should instead be saying, “We need to spend more money to plan and understand where the next humanitarian catastrophes are going to be, so that we can prevent them.”

Q: What was the most difficult environment in which you delivered humanitarian assistance?

Leaning: I was in Mogadishu, Somalia, in January ’92, during the height of the terrible internecine war that persists to this day. The fighting in Mogadishu was a combination of direct slaughter and indiscriminate firing of very heavy weapons on a city built of sandy concrete. Essentially, the city crumbled. People were trapped, killed, mutilated, and brought to hospitals that were completely unequipped to handle complex casualties.

The humanitarian teams were fraying under the stress. People were very strung out, just trying to put one foot in front of another, not get killed themselves. They were traumatized, overwhelmed, intimidated, and having great difficulty practicing according to the standards in which they had been trained. They were hungry, sleep-deprived, in a chronic state of anxiety. No matter what they did, they knew there would be high mortality. Hardly anyone had the capacity to rise above the melee and say, “We’ve got to do things differently.” It was hell.

Q: What was one of the more satisfying humanitarian operations you’ve been involved in?

Parmar: In Pakistan during the 2010 floods, I worked closely with relief partners in the region—Médecins Sans Frontières (MSF), Muslim Aid, and Islamic Relief, among others. We collaborated to avoid duplication of services in an often-chaotic environment, filled with misinformation. MSF, for example, referred us to local staff as they were scaling down in the region, and shared data they’d collected during their operations. This level of coordination is unique in crisis and conflict settings. It reflects new initiatives to improve collaboration among humanitarian actors. The organization I represented also worked closely with the national government and local health departments, which strengthened the sustainability and impact of our efforts. Though our coordination was imperfect, it saved lives and sped aid to those who most needed it.

Q: When does humanitarian aid work well — and when does it not?

Leaning: This enterprise works well at dealing with refugees and internally displaced peoples who are not close to major cities. Cities can be messy — a lot of people, marketplaces, complex trade, networks of crime and corruption. Humanitarians do well when they have a clearer geographic and cognitive space in which to set up and provide hospitals, feeding stations, shelter, water, sanitation, education, and minimum livelihood options. In this operational context, humanitarian aid workers try to nurture new and existing leadership, bring together people who were stranded and separated, establish community conversations about what to do next, and bring everybody to a place where they have a breather from horrible, life-threatening concerns and can begin to make sense of their next steps in their lives. These actions are much more difficult to accomplish when the people in most acute emergency need are mixed in with the more chronic needs and established systems in large urban areas.

The humanitarian community also does not do well when it enters a deeply complicated society that has its own serious fault lines — great numbers of people already in serious need—and then tries to cope with new fault lines and new layers of need. The 2010 Haiti earthquake was slam-dunk the worst-case example of failures in humanitarian effectiveness. On the one hand, it was a massive disaster that created a massive humanitarian crisis. On the other, Haiti was already struggling with severe and entrenched social and economic chronic crises not amenable to an emergency response.

Q: Should humanitarianism be a profession?

VanRooyen: Yes, it should. Think of it this way: How do you train a business student to lead Lockheed Martin? In the same way, how do you train people to work in humanitarian environments that are fluid and difficult? We need to recognize humanitarian assistance as a unique and specialized discipline. Students must know not only about humanitarian principles and the basic provision of services, but also about finance, personnel, diplomacy, culture, and very practical matters of security. They also need to be creative and to lead. The toughest challenge is teaching leadership.

Today, the humanitarian assistance community doesn’t have a university that brings in entry-level people and apprentices them into the field. That’s what our Lavine Family Humanitarian Studies Initiative (HSI) and our new Humanitarian Academy at HSPH are all about.

Q: What advice would you give to students who want to become humanitarian professionals?

VanRooyen: As a physician, my medical expertise is not the thing that makes me useful in the field. Many of the challenges in providing humanitarian assistance are around organization and logistics: getting resources from one place to another. You need to know how to organize, move materials, build programs, manage logistics.

Parmar: You need humility, above all. You need to recognize that you’re a foreigner in somebody else’s world—that they’re the experts and you’re a visitor. Diplomacy is essential. Change isn’t made by being bullheaded or adventurous. It’s made by collaborating with the people who will live with the consequences of the crisis long after you leave.

Q: Do humanitarians often encounter a “headline mentality” in regard to disasters?

Parmar: When I was waiting for my plane to Pakistan, I watched hours of CNN in airport lounges. Millions of people had been affected by the massive floods in that country — people were literally living on roadsides and in flooded fields under tarps with the few belongings they had, little to no food, no security, no privacy, their kids out in the road. But in the hours of waiting for my plane, the floods weren’t mentioned once. Despite the scale of the disaster, the immediate mortality from the flood was relatively low, when compared to Haiti or other recent disasters. As a result, the Pakistan floods quickly fell out of the international spotlight—though aid was still sorely needed.

Q: How can a humanitarian worker stay sane in the midst of turmoil?

Leaning: Do not be dismayed by external criticism of the humanitarian enterprise, much of which is moderately well founded, nor by the internal self-reflections and criticism, which are also valid and important. These arise because the work is rapidly evolving. This is a powerful and relevant undertaking that is now moving into a new generation of challenges and is going to require a new generation of people prepared to deal in complex systems.

An important common denominator for all students going into the humanitarian field is that they understand the ethical and the human rights issues. That is very necessary, because you’re going to go into highly ambiguous settings. Students need to know how to determine what path they should take in complicated situations where questions of right and wrong are embedded in questions of safety and security and practicality. To do this work, aid workers must learn where they themselves stand in terms of their principles and lines of action.

Q: What keeps you going?

Leaning: What keeps me going is I know that people in need, who are trapped and suffering, actually care about whether the world cares. We are now sufficiently globalized that even the most remote community that falls into a calamity can discern the difference between being isolated or having the world pay attention. We are reestablishing what it is to be part of the human community. It’s a universal handshake.

Parmar: I was talking recently to a resident who said, “I can’t do global health work, because I can’t deal with the reality that if I took care of this person in Boston, they would live, but in a crisis-affected region, they’re going to die because there are no resources. That’s fundamentally wrong.” My response was, “You’re absolutely right. But we have to do something.’’